Among the many outstanding casino software developers out there, WMS stands out as one of more accomplished companies.  It may not have the industry dominance of players such as Playtech or Net Entertainment but it has age on it’s side.

WMS can trace it’s lineage back to 1943 when Harry Williams started the Williams Manufacturing Company which would eventually become today’s version.  Williams is probably best known for inventing the ’tilt’ mechanism on pinball machines (to the chagrin of contemporary players) but his early devices included various electro-mechanical games.

Pinball machines were the company’s staple but WMS moved into arcade and home computer gaming in the 1980s; by the end of the 1990s, as it 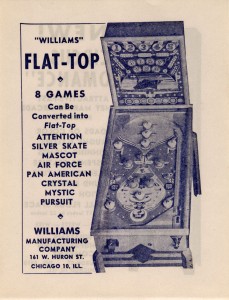 became clear that the days of the pinball were numbered, the company turned their attention to mechanical slot machines, using it’s history of innovation to bring something new to the industry.  WMS now produces physical slot machines for a wide demographic; simpler machines for the more mature player and more complex video slots for the younger players who are looking for a little more variety.

It’s entrance into the online slot market did not come until 2010 and so that part of the business could be seen as a sort of experimental toe dipping into the virtual waters.  The first offerings of this type of casino software went to the UK market, always a favourite testing ground for developers because of it’s mature market, strict regulation and enthusiasm for gambling.

The US came next in 2011 and then WMS partnered with a company called Large Animal Games to insert versions of it’s slots into a free to play Facebook game.