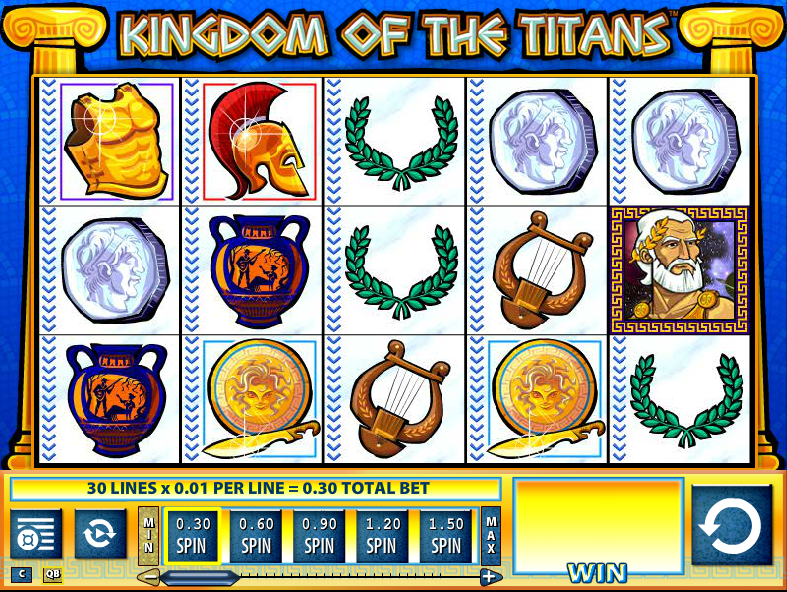 Greek gods are a regular feature of online slots and there are some good reasons why; you can include any number of psychopathic gods, plenty of magic-related features and some lovely graphics.  Kingdom of the Titans is a game from WMS Gaming which arguably has a more cartoonish feel but it also includes two bonus features and some dramatic music.

Kingdom of the Titans is a five reel and thirty payline game and the backdrop to those reels are golden columns in front of blue mosaic.  As we mentioned above, the symbols are indeed quite cartoony but that certainly doesn’t detract from it in any way.

Lots of ancient Greek-themed items are included on the reels and there’s a laurel wreath, a lute, an  ornate vase, a silver coin (which looks like a 50p piece), a golden breastplate, a helmet, a sword and shield and two gods – male and female.

The game’s logo is the wild symbol and there’s a mountain view which represents the scatter which activates one of the features.

When you respin and no more symbols are added, the win will be calculated and your prize awarded.

You’ll need to land five or more of the mountain view scatter symbols anywhere on the reels to trigger this feature; this can be done in one single spin or over several with the Spinning Streak feature.

The more scatters you collect, the more spins you’ll receive as follows:

That’s a good start but there’s more – when you land a win and trigger the Spinning Streak within the free spins round, that win will be multiplied by between 2x and 10x.

All you can alter in this slot is the bet level so our only advice is to click the Autoplay button and enjoy the Spinning Streak feature which is good fun to watch.

We really like this slot and that’s mainly because of the funky feature which gives you loads of free respins; you might not win as much as you think but the satisfaction in this game is from the playing, rather than the winning.