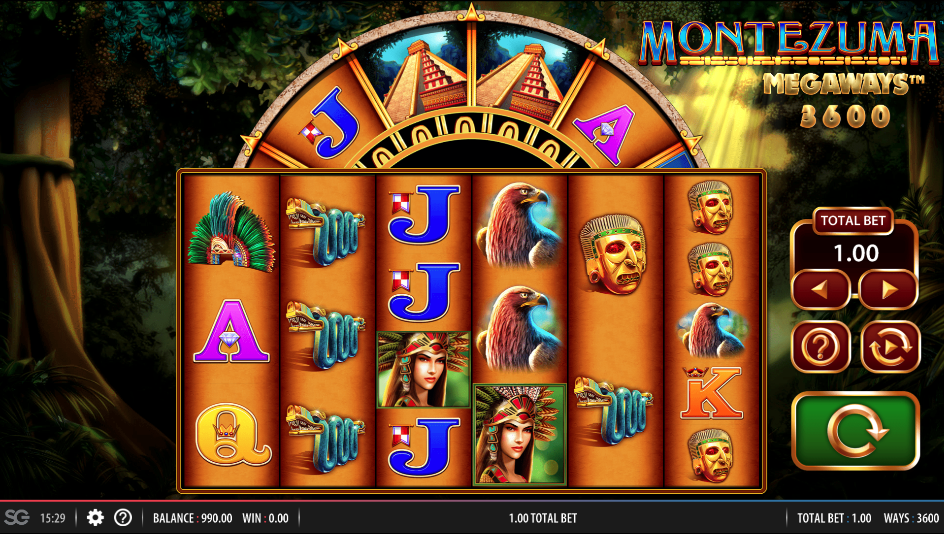 Way back in 2014 WMS gaming released the Montezuma online slot themed on the one of the rulers of the ancient Aztec empire; it’s now returned with a Megaways makeover in Montezuma Megaways, a game with a potential 117,649 courtesy of Big Time Gaming, collapsing reels and free spins.

Montezuma Megaways is a six reel slot with up to seven rows on reels one and six and up to six on the rest – the wheel at the top is another reel, moving horizontally to add more paylines.

The higher value symbols include Montezuma, his princess, his headwear, an eagle, a golden mask and a stylised snake; J, Q, K and A make up the lower values.

The pyramid is wild, it only appears on the wheel during this base game and it will replace all standard symbols to help create winning matches; the golden calendar is the scatter symbol.

Every symbol in a winning combination will disappear and be replaced by more falling in from above, possible creating more wins and continuing the process.

On a non-winning spin the wheel at the top may spin again to give a small chance of a win.

Landing at least three of the calendar scatter symbols anywhere in view will trigger this feature which starts with a spin of the wheel to determine the number of spins awarded; this round is all about the win multipliers which increase by 1x with each successful collapse – landing two scatter symbols in this round will also award a spin of the wheel to reveal extra multiplier values up to 100x.

Montezuma Megaways is an enjoyable enough slot but it’s a shame the graphics haven’t been poshed up a bit from the original version; still, free spins, collapsing reels and the Montezuma Wheel Respin are all good reasons to give it a whirl.