Those who enjoy online slots are well aware of how we’ve traditionally played our favourites games; we used our desktop PCs and our laptops, sitting at our desks or with our laptop placed on our laps while we enjoyed the excitement and anticipation of the spinning reels.

Things are different now; the release of Apple’s extraordinary iPhone back in 2007 (yes, it was that long ago) opened up a whole new world of gaming possibilities and prompted the gaming industry into making huge new strides in that direction.  The iPhone was followed by Google’s Android mobile operating system and Microsoft’s less successful attempt at a mobile platform. 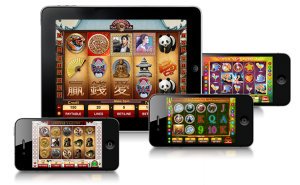 The iPad followed in 2010 and once again broke new ground in terms of technology and possibilities. Supremely portable and featuring a stunning display, it was once more followed by numerous excellent devices from other tech companies using various operating systems.

The result of the introduction of the smartphones and tablets has been an explosion in internet usage away from the traditional locations we were once shackled to; internet access is available from virtually anywhere meaning we can use the superb displays on our phones to choose from hundreds of thousands of apps, some of which give you the chance to to win some money on the slots on the train, as a car passenger, waiting for the bus or sitting on your own in the pub.

Online slots fans can literally play their favourite games anywhere there’s a network signal; does your local pub or neighbourhood coffee shop have some free WiFi?  That’s even better; you don’t even need to use your own data allocation.

The game has changed and if you have an iPad or similar sized table, as many of us do, you don’t even need to use an app; just head straight for the website and play from there. It’s not so many years ago that we were limited to snakes and solitaire to relieve the boredom of the bus queue; now there’s a whole world of gaming opportunities out there. More recent technological advancements, especially in HTML5, have meant there are no longer really many dedicated mobile slots designed for smaller screens – games at an online casino can be played on any size screen.

There’s just one word of warning – if you’re sitting in the pub and hit the jackpot, keep it to yourself, you don’t want to be buying everyone a drink!  Check out our list of mobile slots below: