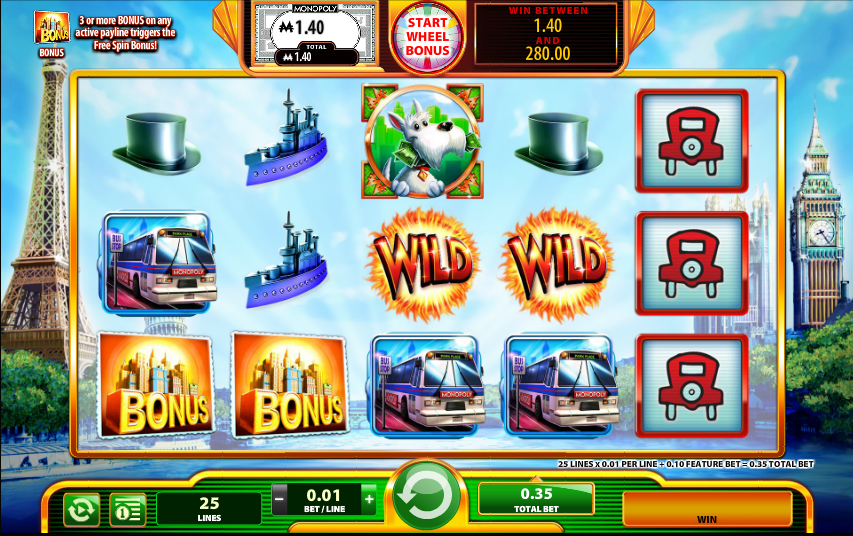 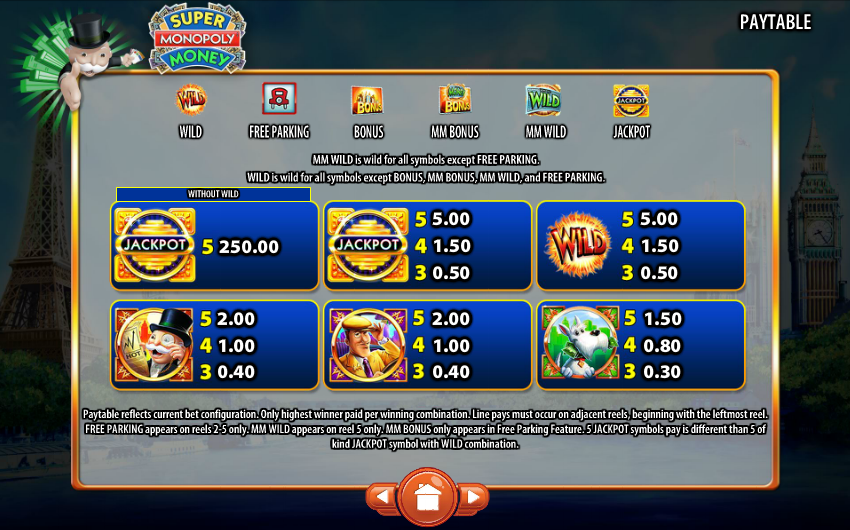 Right then, take a deep breath because it’s time to check out one of the most complicated online slots we’ve ever played; It’s called Super Monopoly Money and it’s another of WMS Gaming’s Monopoly releases since they acquired the license from IGT. it’s full of base game features and extra bonuses and it’s all explained below.

Super Monopoly Money is a five reel slot with three rows and twenty five fixed paylines; Big Ben and Eiffel Tower occupy the backdrop to those reels, clearly a demonstration of some expensive property.

All the symbols are theme-related and include the jackpot, Monopoly Man, a flat-capped chap, a dog, a bus, a taxi, a pot of money, a car, a battleship, a boot and of course a top hat.

There are six special symbols as shown below, although the jackpot is just a high value icon. The basic wild acts normally and substitutes for all other symbols except the Bonus, MM Bonus, Free Parking & MM Wild.

The MM Wild symbol appears only on reel five but when it does it will expand to fill all positions there; any prizes awarded on this spin will be awarded as Monopoly money as well as a cash prize. If there’s no win a prize of between 10x and 100x the line bet will be awarded.

The Monopoly money will be transferred into the box above the reels and now you can start the Wheel Bonus whenever you like; all you need to do is click the wheel and you play a Wheel Of Fortune-style mini-game which awards a cash prize equal to the Monopoly fund, a multiplier of that up to 100x or one of the following:

One of these symbols will now be randomly selected and the one revealed will replace all the Free Parking symbols on the reels. It can be one of the following:

The reels will then be reevaluated for any new wins.

This is triggered by landing three of more of the Bonus symbols on adjacent reels starting from the left hand side (or MM Bonus in the Free Parking feature). Three, four or five bonuses will award 8, 10 or 15 free spins respectively. There’s no multiplier for any wins during this round but more spins can be awarded by landing more bonus icons.

A house or hotel can be awarded randomly on any spin where Monopoly money is not won; these buildings are worth the following payouts in Monopoly money only:

Phew! We think we’ve covered it all and it should now make a little more sense than trying to decipher the paytable; having done that we have to say that Super Monopoly Money is a really appealing slot with tons going on once you’ve got to grips with it all. It’s fairly low variance but so what? It’s definitely a decent addition to the ranks of Monopoly-themed slots so give it a go, it has an RTP of 95.97%.