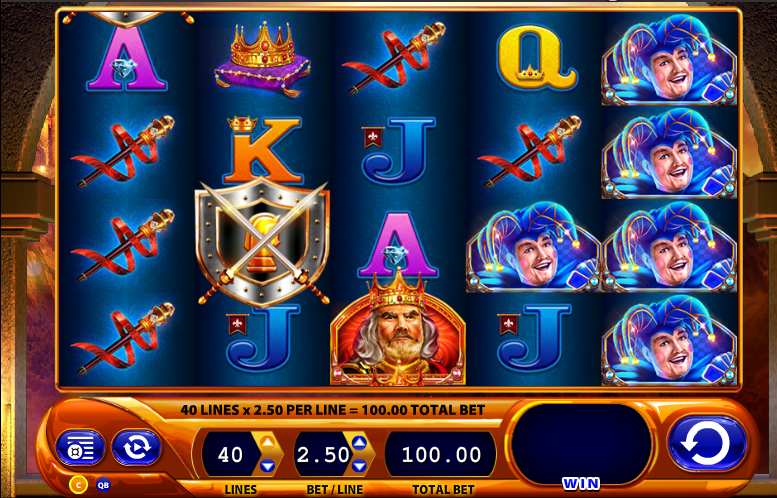 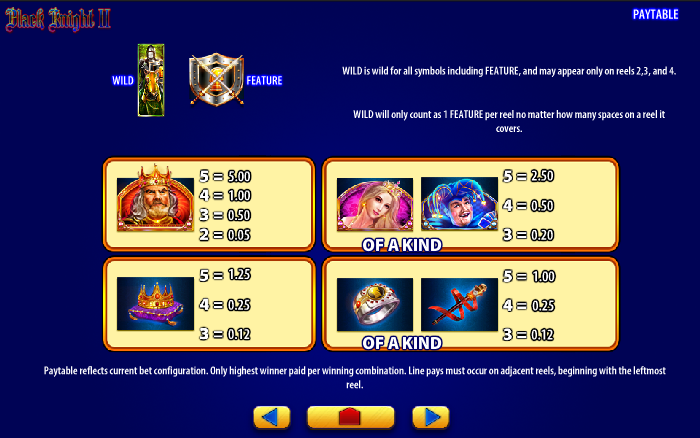 The original Black Knight online slot was an enjoyable enough adventure in which the player spun the reels and journeyed to the dark ages in search of some medieval fun.  Black Knight 2 doesn’t err too far from a successful formula and WMS Gaming have brought back our legendary hero for some more slots-based fun.

Black Knight 2 is in fact very similar to the original version and any changes are largely cosmetic. There’s nothing wrong with progress though, however superficial and this game is played out over five reels and forty paylines (ten more than the original).

The various symbols would suggest that we back in the royal court again and we have a mace, an ornate ring, a crown on a cushion, the jester, the princess and then the king himself (looking a bit like Billy Connolly). Low value symbols are J, Q, K and A.

The black knight’s shield and logo is the bonus symbol and there’s a wild symbol represented by the knight on horseback.

All the higher value symbols can appear stacked on the reels which means they may appear on top of each other; this should help out when making winning combinations.

The wild symbol is a bit more useful than normal here because it substitutes for every other position; most wilds will not substitute for a scatter or bonus symbols but it does here, meaning that it will help out if you want to trigger those free spins.

The wild only appears on reels two, three and four and, like the symbols, is stacked which helps out with win lines.

The only bonus feature here is some free spins and they’re triggered by landing three or more of the bonus symbols (including wilds) starting from the left hand side of the reels. You’ll only get seven spins with no multiplier so don’t expect to get rich from this feature.

Low rollers can reduce the number of paylines safe in the knowledge that the chances of triggering the free spins are the same – prizes will of course be lower though.

There’s not a great deal to recommend this slot over the original but if you liked that one, then you’ll probably appreciate this.  It certainly looks nice but can become boring quite quickly.