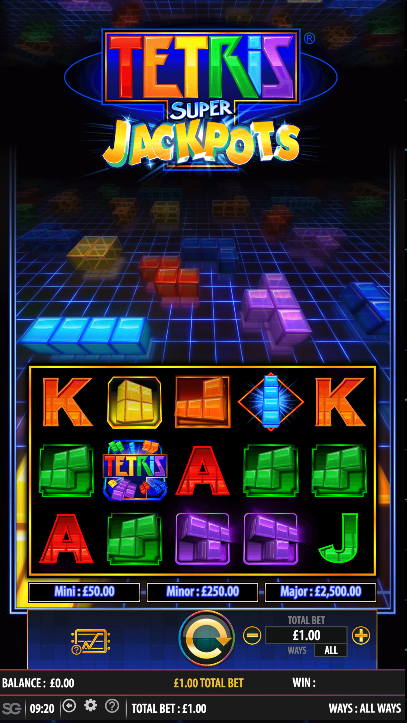 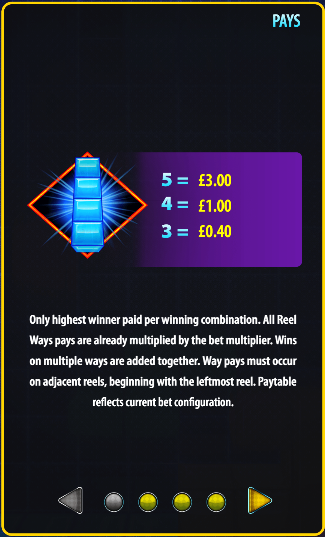 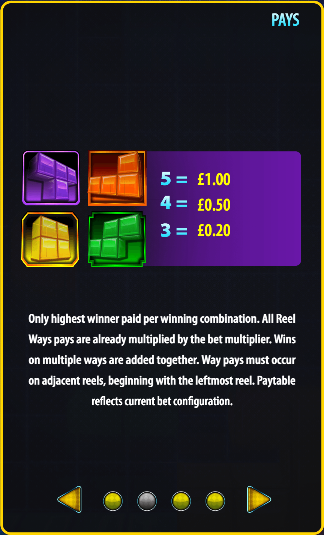 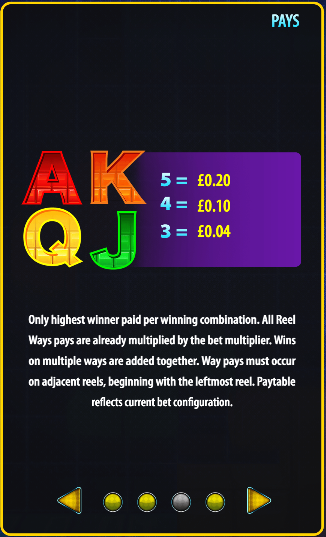 Those of us of a certain age will remember playing the block dropping game Tetris before there was anything better to do with our time and so there’s a touch of nostalgia here as we check out Tetris Super Jackpots, an online slot from WMS Gaming which combines blocks with reels.

Tetris Super Jackpots is a five reel slot with three rows and an All Ways structure which means that winning combos are formed as long as there are matching symbols in adjacent rows starting from the left hand side. Tetris blocks drift slowly down in the background and that large gap above the reels will come in useful later as we shall explain shortly.

Five Tetris shapes of blue, purple, orange, yellow and green represent the higher values while 10, J, Q, K and A make up the lower ones.

There’s no wild symbol in this game but the Tetris logo is the bonus icon which activates the main feature.

This can occur randomly on any spin and you will see one or two Tetris shapes overlap the reels from above and covering several reel positions; this can help out with some bigger wins.

This is triggered by landing three of the Tetris bonus symbols anywhere on reels two, three and four; the reels will now expand to eight rows, filling up some of that space above.

When the spins are underway any wins will create a ‘Tetrimino Watermark’ which is one of the Tetris basic shapes. This shape appears in the background and will fall to the bottom of the reels. Completing a row with Tetris shapes will award 20x the total stake; those blocks involved in that complete row will disappear and those above will fall down to take their place. The shapes will gradually build up and once an entire shape is above the reels, the spins are over.

One of the jackpot values is awarded at random if, during the free spins round, a Golden Watermark is part of a cleared row. The prizes can be the Mini (50x stake), Minor (250x stake) or Major (2500x stake).

Tetris Super Jackpots is a really clever slot which is probably best played on your mobile device because of the shape of the screen; it’s good to see some Tetris gameplay during the free spins round and there’s an RTP of 95.80%