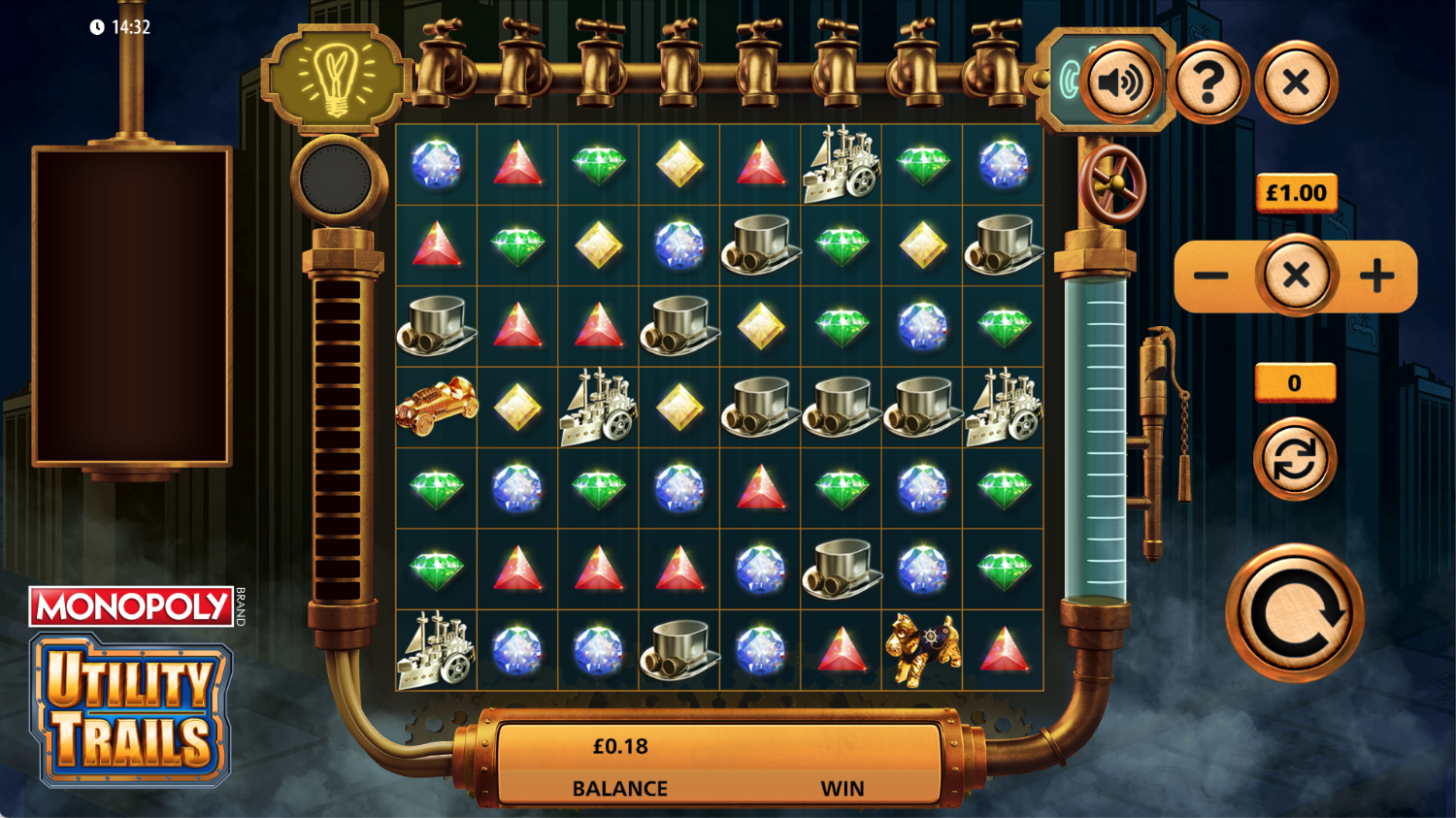 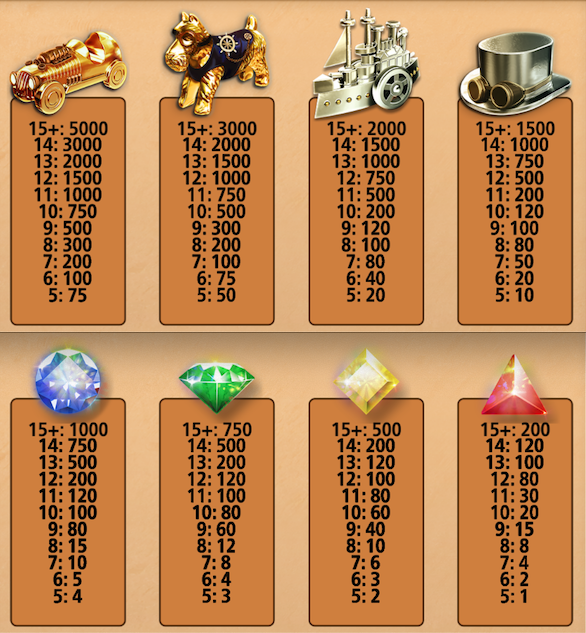 WMS Gaming produce a great range of Monopoly-themed online slots and here we have one more based on the famous board game to add to the list; it’s called Monopoly Utility Trails and it comes with a cluster win mechanic along with bonus features themed on the Water Works and the Electric Company.

Monopoly Utility Trails plays out on the 8 x 7 grid you can see above; there’s an industrial vibe to the gameplay and the task is to create clusters of five or more matching symbols which are connected horizontally and/or vertically.

Symbols in winning clusters will disappear to allow more to fall in from above, hopefully continuing the process and those wins and their values will be listed in the box on the left hand side.

The theme-related symbols are traditional playing pieces and include the car, the dog, the ship and the top hat – there’s a top prize of 5000x the stake for fifteen cars in a cluster; gems in blue, green, yellow and red make up the lower values.

There are four different wild symbols as shown below and the golden wild also comes with a feature which we’ll explain below.

At random a 3×3 Community Chest card can land on the reels and reveal a cash prize of between 5x and 1000x the stake.

The meter to the right is gradually filled by collecting tap symbols and once you have fifteen this feature will be activated. The reels spin and any clusters formed are locked in place for another spin – any new clusters or additions to those existing clusters will award another spin. At random the taps above the reels may open and drench the lowest value cluster, upgrading them to the next highest symbol; if all symbols are already the same then they’ll all be upgraded to the next one.

The round is over when no additional clusters are created or added to and the payout is made.

This is triggered by collecting and filling up the meter to the left with fifteen light bulbs; this round replaces all symbols on the reels with property cards, colour tiles and chance cards; the reels will now spin and you have three lives:

Lives are lost if a property card, colour cluster or chance card fails to appear on a spin.

Off The Rails Jackpot

We’ve really enjoyed playing this Monopoly-themed slot which offers something a little different to the others developed by WMS Gaming, especially in terms of the cluster mechanic; there’s no actual board game bonus feature here but all the extras work well and if you p[lay for long enough you’ll fill those meters in the end. There’s also a relatively high RTP of 96.61%

Monopoly Utility Trails is a monopoly-themed arcade slot played on a 8 x 7 grid with a cluster pay mechanic.

Yes! Features based on the Electric Company and Waterworks plus cascading symbols, Wild Tracks and the Off The Rails Jackpot.

The Return To Player percentage for Monopoly Utility Trails is 96.61%.

How To Win On Monopoly Utility Trails?

Land clusters of at least five matching symbols; trigger one of the four bonus features.

Where can I play Monopoly Utility Trails?