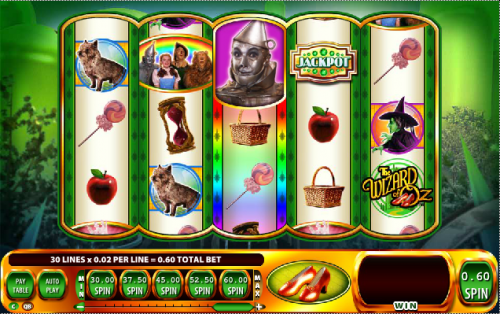 The Wizard of Oz never really goes out of fashion; from L. Frank Baum’s 1900 novel to the first film made in 1939 and on to the 2013 sequel, Oz The Great and Powerful, it’s story that holds the imagination whether you’re a child or an adult.

Wizard of Oz Ruby Slippers is an online slot developed by WMS Gaming which brings the content of the original film to the computer screen and it’s good fun if not that graphically advanced.  There’s a wide variety of extra features and winning opportunities to keep you distracted from the slightly dodgy presentation.

Every symbol contains a an item or character from the film; the lower value ones are the hourglass, a lollipop, a basket, an apple, a wicked witch and Toto the dog.  Higher value symbols are Glinda the good witch, the four main characters, a Wizard of Oz symbol and a jackpot.  Wizard of Oz is the wild card while the scatter is represented by the Wizard.

This feature is awarded randomly  and you will see the slippers at the bottom of the screen click together; bubbles will form and float to a reel which will change to a stacked wild.  Between 1 and 4 reels will be transformed and the more wilds you have, the bigger the win.

Land two winning symbols on reels 1 – 4 and a Wicked Witch on reel five and you’ll win this feature; you’re presented with a grid of 25 boxes and you can keep picking prizes until the round is over,

As well as the above symbols, there are a number of special character pictures and landing them can give you access to Free Spins, Multipliers and Wilds.

Spinning special characters on the reels can award you with a lucrative bonus in which you see each character in a crystal ball while the prize total increases.

Wizard of Oz Ruby Slippers is an action packed online slot machine with a relatively generous player return of 95.96%.  It may not have the flashiest graphics we’ve ever seen but it’s definitely worth a go.  You can bet from €0.30 to €60.00 per spin