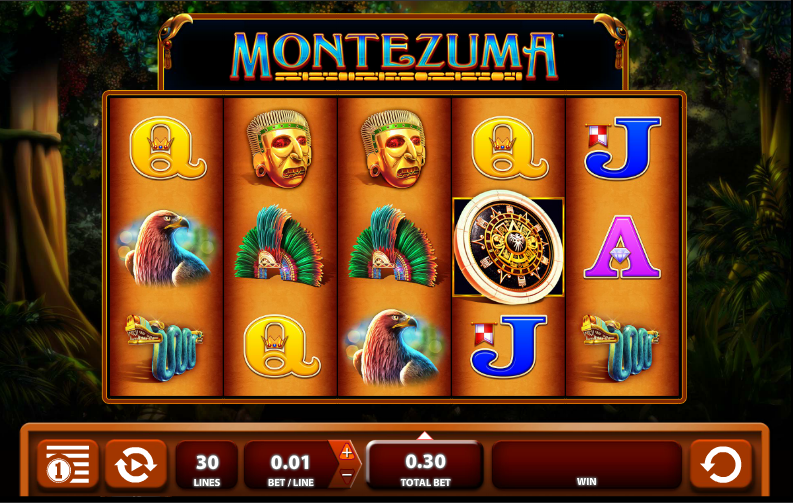 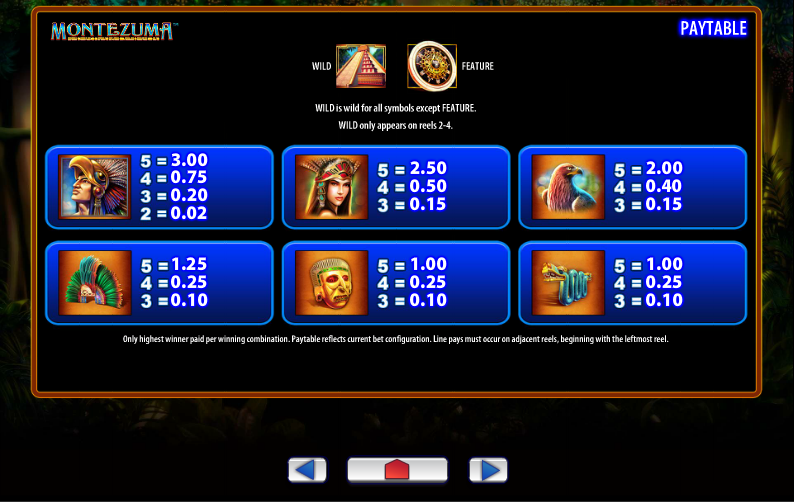 The Aztec empire has provided online slots developers with a fertile subject on which to base plenty of games in the past and now we have one more; it’s a brand new release from WMS Gaming called Montezuma and it’s title character is of course the famous Aztec emperor who lived during the 15th century. Read on to find out more about this history-themed game.

Montezuma is a five reel and thirty payline slot set deep among the temples and trees of the Amazon jungle. There’s a golden hue to proceedings which reflects the importance of that precious metal during this period.

J, Q, K and A are the lower value symbols but the higher value ones are all theme-related and include a snake statue, a golden mask, a green headdress, an eagle, Montezuma’s wife and Montezuma himself as the highest paying symbol.

The wild symbol is a pyramid and the feature is activated by the big wheel scatter.

There’s only one bonus feature in this game but it can be a lucrative one f you’re lucky. The free spins are triggered by landing three or more of the wheel scatter symbols anywhere on the reels.

The wheel will now spin to determine the number of spins awarded, a number between three and twenty five. With each spin, another wheel will determine a multiplier for any win and if you can land just two more of the scatter symbols during the feature, more spins will head your way. That number of spins is also determined by a spin of the wheel.  During our testing we managed 30+ spins several times.

The free spins are triggered by scatter symbol which means you can play as many or as few paylines as you want and still have the same chance of activating them. Prizes will of course be proportionately less.

There’s nothing particularly ground-breaking about Montezuma but it looks good and plays very smoothly. The background music and sound effects are well worth listening to and the added extras in the feature are a nice touch.