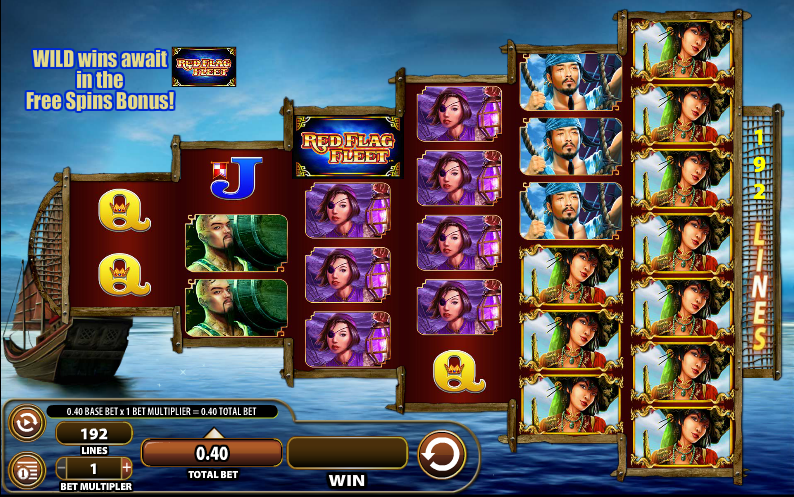 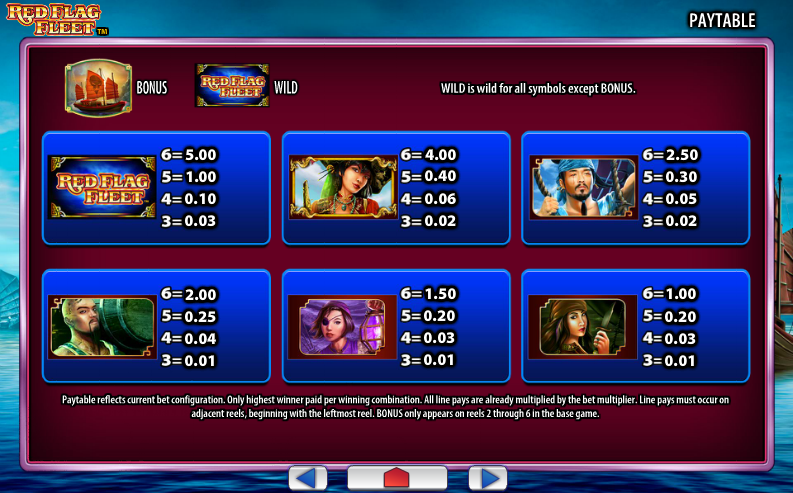 Pirate-themed online slots come around with a pleasing regularity and there’s one more to add to the list from WMS Gaming. It’s called Red Flag Fleet and like many WMS games it features an interesting reel structure which adds an extra element to the gameplay. The pirates here are Chinese and there’s also an oriental flavour to proceedings.

Red Flag has six reels and 192 paylines. You can see from the screenshot above that things look a little different – from left to right the reels contain 2, 3, 4, 5 6 and 7 positions. There’s a nicely animated sea in the background along with a Chinese junk bobbing in the water.

The main symbols are a range of five pirates, some of which look a little clean to be historically accurate and the lower values are the standard J, Q, K and A. The Red Flag Fleet logo is wild and then there’s a bonus symbol featuring the pirate ship itself which activates the main feature. The wild can appear stacked, meaning that more than one can appear on top of each other, offering more winning opportunities.

There’s just the one piratey feature in this game and it’s a free spins round. It’s triggered by landing three, four or five of the pirate ship scatter symbols on reels two to six for which you will receive the following:

While the spins are underway the reels flip around so that there are seven position on reel one, counting down to one on reel six. Additionally, at least two completely wild reels will be added to the set on each spin, hopefully making it a bit easier for you to make the most of the free spins. Landing three or more pirate ships on reels one to five will win you more spins.

The paylines are fixed and there’s no interactivity at all here so we’ve got no advice to give. It’s worth keeping the sound on though for the dramatic, oriental soundtrack.

WMS Gaming makes a habit of using these odd reel structures and it’s probably a personal decision whether you like them or not. We think there’s nothing wrong with trying something a bit different and are happy to recommend this slot – give it a go.