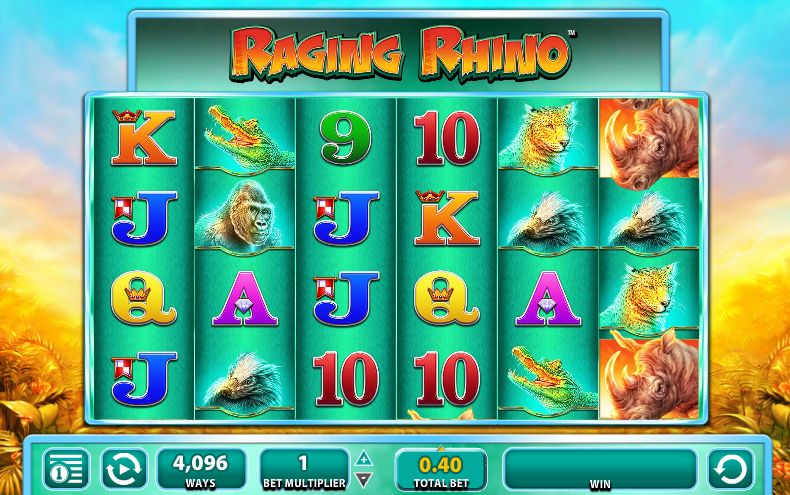 WMS Gaming are one of those slots developers that tend to produce games which are a little different from the norm; Raging Rhino is an animal-themed slot from this company which offers something a little diverse and the first thing you notice is that it has six reels, rather than the standard five. Read on to find out what difference this makes to the gameplay.

So Raging Rhino plays out over six reels and four rows of symbols and because you can make winning combos as long as there are matching symbols on adjacent reels, there are an impressive 4096 ways to win. While that sounds better than the usual fifteen or twenty paylines, the percentage return to the player will remain the same.

When you press the ‘Spin’ button, the reels will expand to fill the foreground and hide the sun-baked background; the lower value symbols are the standard 9, 10, J, Q, K and A while the higher values are a range of nicely drawn wild animals – a mongoose, an alligator, a cheetah, a baboon and a rhinoceros.

The wild symbol is a beautiful setting sun behind a tree and only appears on reels two to five; there’s also a big sparkling diamond which activates the main feature.

That big sparkly diamond is the scatter symbol which you need to land to trigger the free spins and because there’s six reels, you can land up to six diamonds as follows:

If a wild symbol helps make a winning combo it will multiply the win by 2x or 3x and it’s also possible to add more spins to the total by landing two or more diamonds during this feature.

The fixed paylines mean there’s very little player interaction needed here so our only tip is to keep the sound turned on to experience all the animal sound effects on show.

This is a nice looking slot which does offer something a little different with the six reels and four rows and once you’ve got used to that layout it’s fun to play. We like the way winning symbols raise themselves above the reels in a 3D manner.