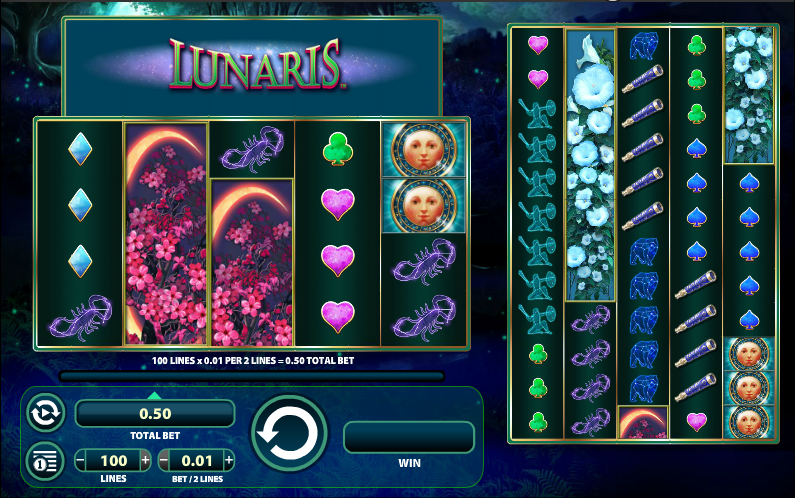 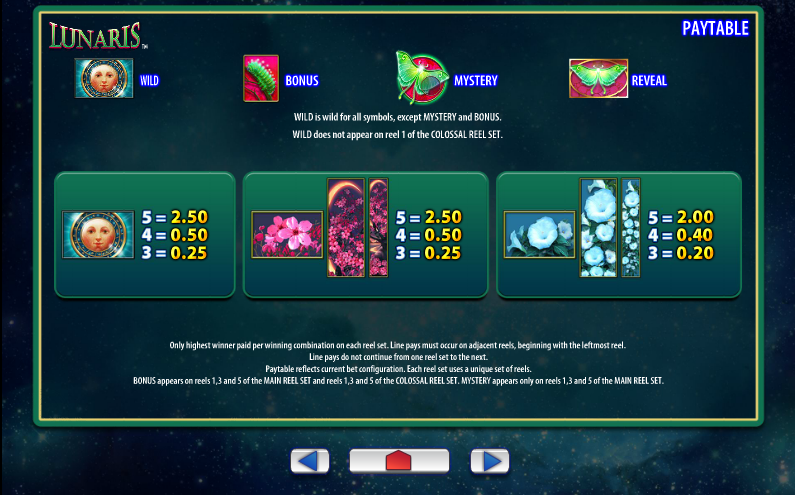 WMS Gaming are a developer who are always happy to introduce something new to the world of online slots and they appear to have done so again. Lunaris is a brand new game and a lovely-looking one at that, it features a main reel and a colossal reel and while that may not be new, the interaction between the two sets of reels certainly is. Read on to find out more.

Lunaris features two sets of reels as mentioned above – the main set and the colossal set; the main set has five reels and four rows while the colossal set has five reels and twelve rows for a total of 100 paylines. Clubs, diamonds, spades and hearts make up the lower value symbols while the higher values are related to the night sky. They include various constellations, a telescope and then white and pink flowers – both of which clearly bloom at night. The symbols can appear stacked on both sets of reels.

The wild is a face inside an ornate frame, the bonus symbol is a caterpillar and the mystery symbol is a glowing moth.

This is the most noticeable feature and it’s what makes this game unique. The mystery both appears on reels one, three and five on the main reel and each time you land one you will see it has a number attached (5, 8, 10, 15 or 20). That number of moths will fly over to the colossal reel and land on random positions. Those positions will all then change into the same, randomly-selected standard symbol. Prizes will now be evaluated.

Landing three or more of the caterpillar symbols anywhere on both sets of reels will trigger the following:

The caterpillar only appears on reels one, three and five of either set of reels. The free spins take place on a different set of reels but the payouts remain the same. It’s also possible to re-trigger the spins by landing three or more caterpillars again.

Both features have the same chance of triggering even when playing minimum paylines but where’s the fun in that? Go for 100 lines for maximum action.

This is one of those slots that is a real pleasure to play, even before you start thinking about winning money. It looks and sounds great and the mystery feature gets triggered pleasingly often. Well worth checking out.