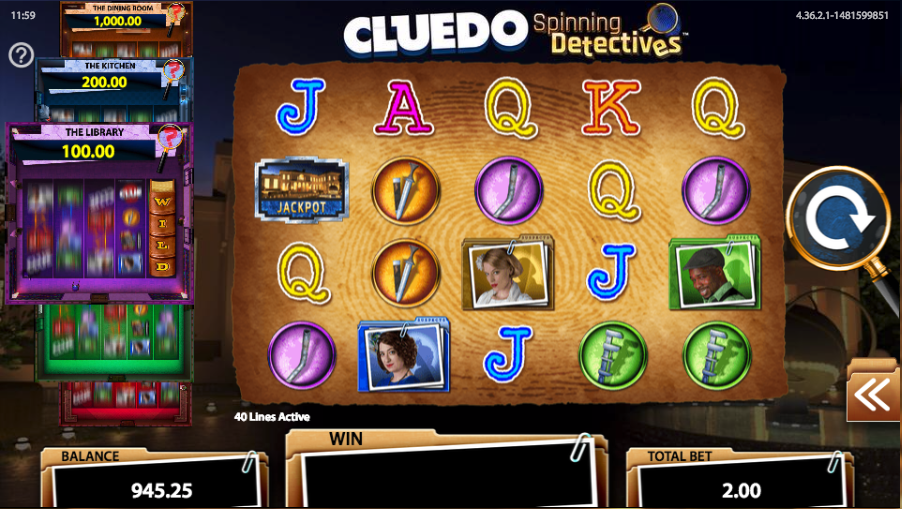 It’s been a while since we’ve checked out a Cluedo-themed online slot and so this release from WMS Gaming is certainly welcome; it’s called Cluedo Spinning Detectives and it’s a feature-filled game with plenty of variety and money-winning potential.

Cluedo Spinning Detectives is a five reel slot with four rows and forty fixed paylines; the reels spin on a piece of grubby paper marked with a fingerprint while to the left there is a constantly rotating selection of Cluedo’s rooms which we shall explain in more detail below.

The high value symbols are Mrs White, Mrs Peacock, Mr Green, the spanner, the knife and the lead piping; J, Q, K and A are the lower values.

The Cluedo logo is wild and will substitute for all others except the Jackpot mansion, all room cards and the two separate Bonus icons.

These are triggered each time one of the five room cards appears on the reels – the reels will now change to match that particular room and you’ll receive one free spin with a specific bonus:

The magnifying glass is the scatter symbol in all rooms and the envelope is the wild.

This is triggered by landing three of the stacked room bonus symbols anywhere on reels one, three and five; you will initially receive seven free spins which start in the conservatory; landing a wild envelope icon on reel five offers players the opportunity to open one of the Secret Clue cards which will award extra spins or a move to another room. All the rooms offer the same bonuses as described above.

Trigger this by landing three of the red question mark bonus symbols anywhere on reels one, two and three; now you must pick from cards available until all Clues Found spaces have been filled – they award suspects, rooms and 2x multipliers.

It takes a bit of time to get your head around the various bonus features and rules but when you do Cluedo Spinning Detectives is a real treat to play; it includes plenty of elements from the original board game, the potential for big wins and an RTP of 96.06%.