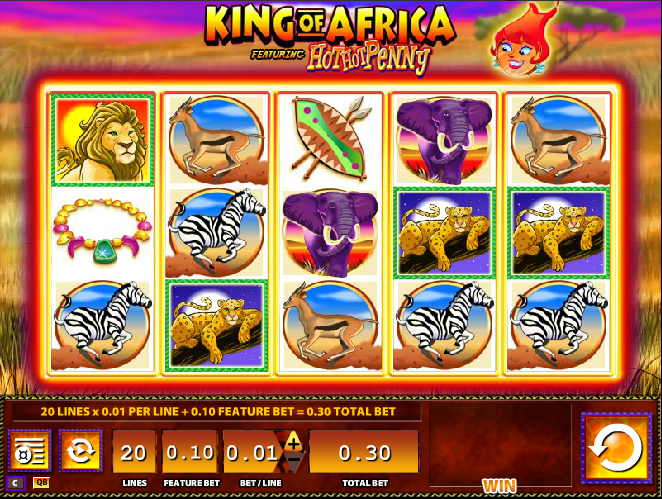 We’re heading to the dusty plains of Africa for this online slot review and this is King of Africa, an animal-themed game from WMS Gaming which also features the flame-haired character of Hot Hot Penny. She’s a welcome bonus addition to what is a nice-looking but basic game in which the animal characters are reminiscent of a Disney film.

King of Africa plays out over five reels and twenty paylines and the backdrop to the reels is that wide African savannah underneath a purple and pink sky. As we mentioned above there’s a real Disney feel to some of the animal characters and the lion and leopard look as though they have stepped straight out of the Lion King movie. Other symbols include a shield, a necklace, a zebra, an impala and an elephant.

The game’s logo is wild and there’s a scatter symbol which is a tree silhouetted against the setting sun which activates the one of the features. The Hot Hot Penny feature is an involuntary extra bonus which you must pay a little extra for (10x the line bet).

The silhouetted tree scatter symbols are the key to activating the free spins feature in this game and you’ll need to land there or more to do just that. This will reward you with an initial 8 spins but you will then get to play the Hot Hot Penny feature to win some more.

During this game you can pick extra spins or coins as you can see from the video below; finding one, two or three coins will win you 5, 10 or 30 more spins.

When this is complete the spins will start and an expanded giraffe wild will fill one random reel on each spin.

If you’re a low roller and just want to trigger the feature you can use minimum paylines because the free spins are activated by a scatter symbol. You’ll win proportionately less money though.

There’s a nice jungle soundtrack to this game and plenty of animations to keep you amused while you’re playing; the Hot Hot Penny feature adds a little extra to the free spins and this game is certainly worth a few minutes of your time.