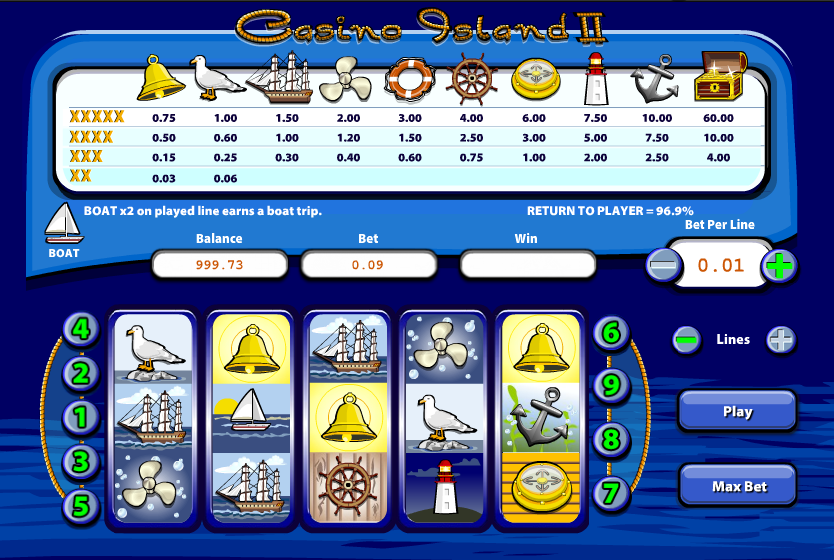 Casino Island 2 is an odd little slot from WMS Gaming; that’s not to say it’s not enjoyable because it’s most certainly an entertaining way to spend some of your valuable reel-spinning time.  It’s a nautical themed game and a bit of a throwback to a Vegas-style slot but one which features a bonus game nonetheless.

The entire game is squeezed onto one screen; normally the paytable would be a button click away but here it takes up the top half of the main screen as you might find with a three reel slot.  The reels are placed underneath the table and are a little smaller than usual out of necessity but that doesn’t detract from their visibility.

Casino Island 2 features five reels and up to nine paylines and the the seafaring theme contains some appropriate symbols including a ship’s bell. a seagull, a three-masted sailing ship, a lifebuoy, the ship’s wheel, a navigating compass, a lighthouse, an anchor and a treasure chest.

The symbol which activates the bonus feature is the smaller sailing boat which you can see in the centre of the reel on the screenshot to the right.

Casino Island 2 contains just the one bonus game and it’s activated by landing two of the small sailing boat scatter symbols anywhere on an active payline.

You will now get to play a mini-game in which you must choose which island to sail to; three rocks underneath the water line hamper your progress but even if you hit one instead of getting to the island, you’ll win an award as follows: