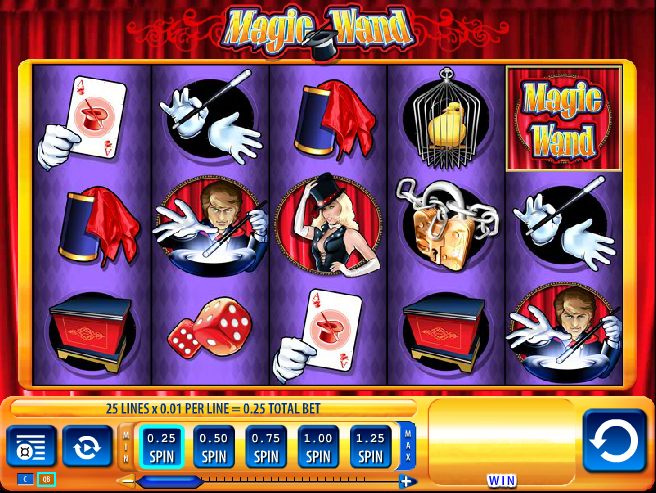 Classical magic is alive and well and currently featuring in an online slot from WMS Gaming. Magic Wand is the name of this particular game and it’s a tribute to an earlier style of magic in which rabbits were palled from hats, playing cards were widely used and escapology was a favourite of the performers.

Magic Wand celebrates all those things and it’s played out over five reels and twenty five fixed paylines; it’s all set against a background of a blood-red stage curtain which reminds us of music hall shows and Las Vegas extravaganzas – there’s no Dynamo here, it’s all Paul Daniels and Debbie McGee.

The symbols are all recognisable from those conjurors performances we remember as children and include a playing card, ribbons, dice, a magic box, a bird in a cage, white gloves holding a wand, a chained up padlock, a sexy assistant and the magician himself, producing something impressive from a top hat.

The Magic Wand logo is the wild symbol and there’s a top hat and wand scatter which triggers the bonus feature.

Everybody likes some free spins and the good news is that five, seven or twenty are available here depending on whether you can land three, four or five of the scatter symbols anywhere on the reels in the base game.

You’ll then need to click ‘Start Feature’ to kick things off and you should also notice that two reels will become wild on each spin, which is handy.

Landing three more scatters during this feature will reward you with five more free spins.

Any advice we can give is limited here because there’s very little to change apart from the wager per spin.  The paylines are fixed at twenty five so all we’ll say is turn the sound off to avoid annoyance.

This is a pretty average slot which doesn’t particularly benefit from a slightly dated theme and there’s plenty of better games out there these days.  Members of the Magician’s Circle should probably check it out though.