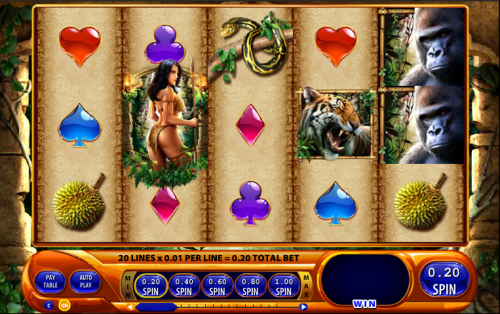 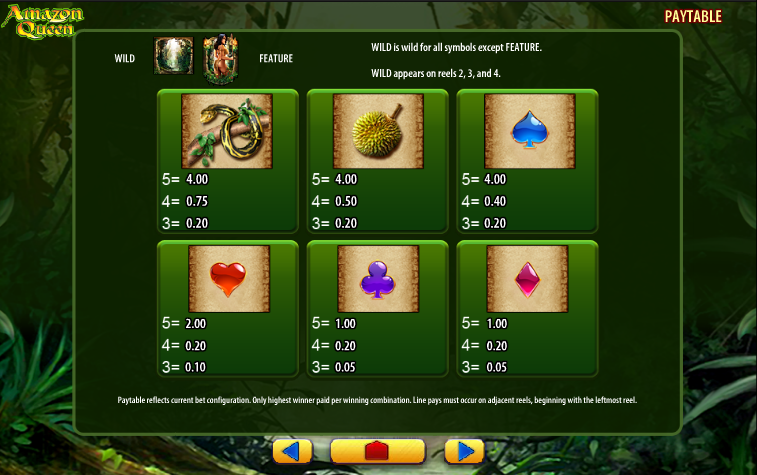 The legendary Amazon Queen is the focus of this tropical online slot machine from WMS Gaming; the Greeks first wrote about the fictional female Amazon warriors who were actually placed in what is now the Middle East.  Popular myth would have it that these women emanated from the jungles of the Amazon though, probably due to the name – ha-mazan – given to them by the Iranians.

But that’s enough of a history lesson; this slot is a five reel and twenty payline offering and sure enough it features our beautiful Amazonian warrior located in deep in the jungle. The low value symbols are a little different here – we have different coloured playing card suits instead of the usual J, Q, K, etc.

Higher value symbols include a durian fruit, a snake coiled around a branch, a blue and yellow parrot and a roaring tiger.  Special symbols are a jungle clearing which is the wild and our scantily clad Amazon Queen herself who represents the scatter symbol.

The free spins feature is the main bonus game here and it’s activated by landing three, four or five of the Queen’s scatter symbol anywhere on the reels during standard gameplay.  You will then be rewarded with ten, twenty five or an impressive one hundred free spins respectively.

Landing three or more more scatters during this phase will win you more free spins.

The gorilla symbol comes in especially handy here; he forms winning combinations in the usual way but he can also create combos from right to left.  The gorilla must feature on successive reels and he’s also stacked so if he covers all the symbols on one reel you’ll get a nice animation of this impressive creature.

This is a fairly standard but enjoyable slot from WMS Gaming which is enhanced by the gorilla feature; the one hundred free spins are excellent if you can win them but you’re more likely to win just ten.  Our preference would have been for a more jungly soundtrack but that’s just nit-picking – this slot is well worth some minutes of your time.