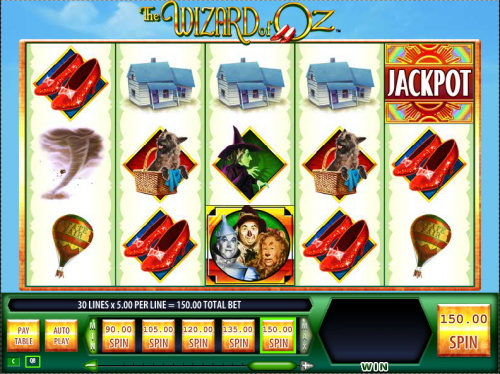 Every generation should by now be familiar with the The Wizard of Oz, the 1939 film based on L. Frank Baum’s original novel.  It tells the story of Dorothy, the Kansas farm girl swept away to the fantasy land of Oz in a tornado.  Her adventures with the Lion, the Scarecrow and Tinman are familiar to film  fans of all ages.  This online slot from WMS Gaming is a pretty faithful homage to the original story.

The Wizard of Oz is a a five reel and thirty payline slot with the famous rainbow as the backdrop to the reels; the symbols on the reels are all Oz-related so we have the tornado, Dorothy’s house, a hot air balloon, her dog Toto, the Wicked Witch, the ruby slippers, her three companions and Dorothy herself.

The wild symbol is The Wizard of Oz logo, there’s a Jackpot symbol and also an Emerald City symbol which triggers the bonus feature.

This is a minor bonus and you don’t need to do anything to trigger it; Glinda will occasionally appear during standard gameplay and turn between one and five of the reels into expanding wilds. The reels will then be re-evaluated for any winning combos.

You’ll need to land the Emerald City symbols on reels one, three and five to trigger this bonus and the first thing you need to do is pick one of the flashing symbols on the screen.  Underneath are the following options:

Cash Win – the player is awarded a cash prize

Winged Monkey Feature – you’ll get eight free spins here and during this phase if you can land a Winged Monkey Wild Feature symbol on reel three you’ll be asked to click anywhere on the screen.  A number of winged monkeys will fly onto the screen and turn random symbols wild, giving you loads more winning combo chances.  Check the video below for an example of this bonus game.

Road To Emerald City Feature – in this game you initially get to pick one emerald from a selection available; you will either win a cash amount, a trip to ‘character land’ or a trip to the Emerald City.

If you pick the character land you’ll head to the place associated with that character – Scarecrow Cornfield, Tin Man Apple Orchard, Cowardly Lion Dark Forest and Wicked Witch Castle.  Here you select a gold charm to uncover either the character or a return to the Yellow Brick Road where you pick emeralds and the round is over.

If a character (or more than one) has been found and you make it to the Emerald City you will win cash prizes depending on which character it is with Dorothy being the most valuable.

A great original story is complemented by a well-designed slot with funky graphics and a sparkly soundtrack.  It’s worth sticking with this slot if only to see if you can make it through the complex bonus game to reach the Emerald City