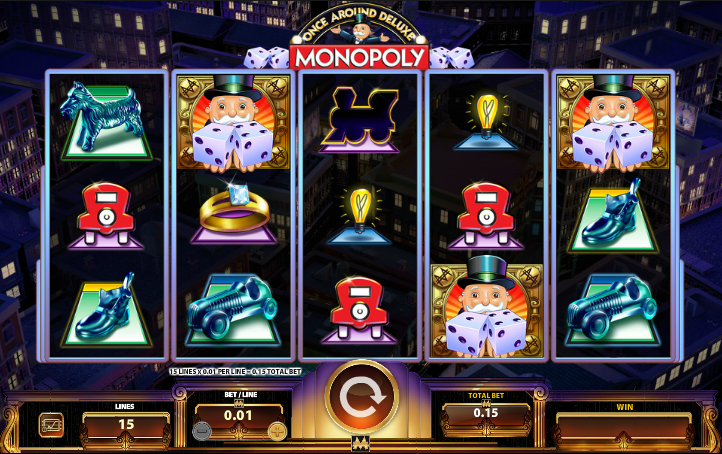 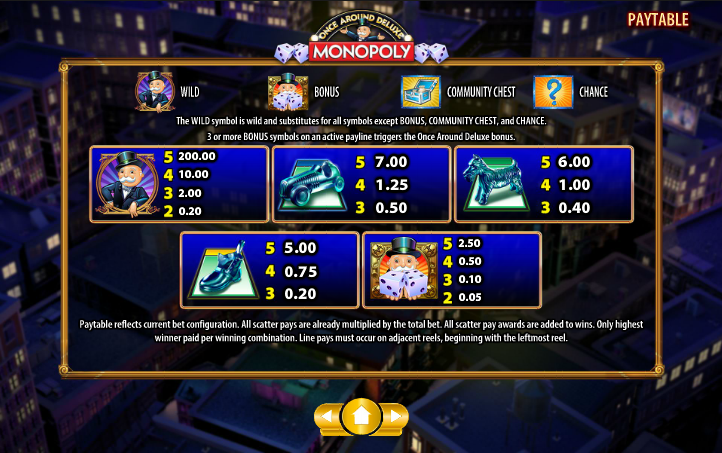 Monopoly is a many-faceted game and it’s no surprise that it has provided online slots fans with so many themed-games over the years. Monopoly Once Around Deluxe is another to add to the list, it’s developed by WMS Gaming and it adds something extra to the genre – you can read all about it below.

Monopoly Once Around Deluxe is a five reel slot with three rows and fifteen fixed paylines; there’s a faint art deco design to the game and the reels spin against a backdrop of a city at night.

All the symbols are related to the theme and include various playing pieces – the car, the dog and the shoe, a gold ring, a railway station sign, a free parking sign, an electric sign and the utilities sign.

Mr Monopoly himself is the wild symbol and he will substitute for all others except the bonus symbols – Mr Monopoly with dice, Community Chest and Chance.

Once Around Deluxe Bonus

This is triggered by landing three or more of the Mr Monopoly bonus symbols on an active payline; you will now be asked to select one of the tokens on display. The dice is now rolled and you move around the board collecting rent from the various properties on which you land.

When you reach ‘Go’ the round is over unless you land on it exactly at which point you get another go around the board; another circuit can also be granted by landing on a Chance or Community Chest space and receiving an ‘Advance To Go’ card; these cards may also move you to various other spaces or award a multiplier of up to 100x. You can’t go round the board any more times.

This is an optional extra bet players can place which allows them to build houses and hotels on certain properties on the board before the bonus starts; landing on these properties will reward you with higher payouts.

Monopoly Once Around Deluxe is an entertaining addition to the ranks of Monopoly-themed games and we particularly like the option to build houses and hotels for a bit of extra risk/reward during the bonus feature. The RTP is slightly low 92.03% but can be increased to 94.00% by using the house building option.