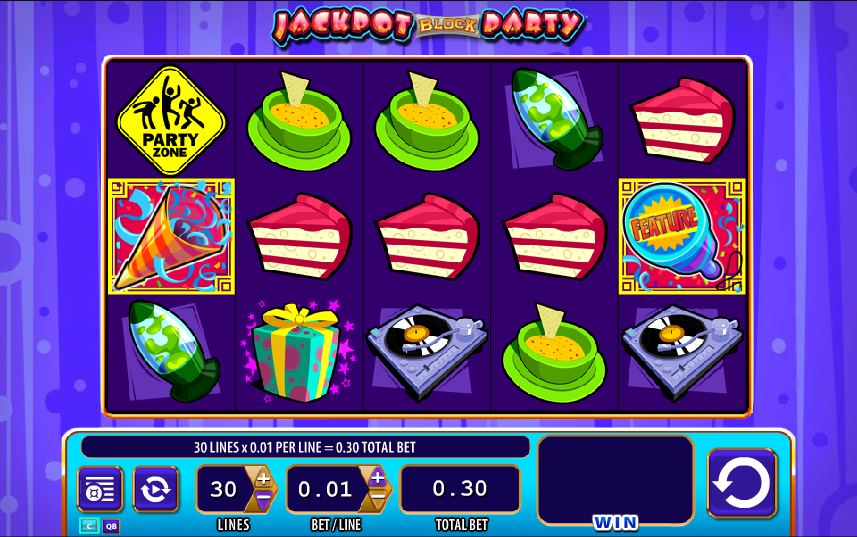 Ladies and gentlemen! We have a winner for the prize of best name for an online slot machine and it’s Super Jackpot Block Party; seemingly a random collection of words stuck together to form a largely meaningless sentence but who cares – it’s clearly all about a party and it’s a brand new release from WMS Gaming.  It follows on from the not dissimilar Super Jackpot Party.

Super Jackpot Block Party is a five reel and thirty payline slot with lots of bright colours, cheerful music and an interesting bonus feature which you can check out in the video below. The background to the reels is a little boring but there’s a great range of party-related symbols to try and match.

We have a piece of cake, some chips and dip, a ‘party zone’ warning sign, a lava lamp (which will be probably be drunk when the alcohol runs out). a glitter ball, a record deck and a ‘7 party’ logo.

There are three scatter symbols to trigger one of the features (a party popper, a trumpet and a roll out tooter thing), a gift symbol which activates a second bonus and a wild which is the game’s logo.

Land three or more of the wrapped up gifts anywhere on the reels and you’ll trigger this bonus; just pick one of the presents to reveal a cash prize and if you’re lucky you may trigger the Block Party feature. The more scatters you land to trigger the bonus, the more likely you’ll be to find the Block Party gift.

Three or more of the party accessory scatters will activate this feature and you will be taken to the screen you can see in the video below. There are four party zones (Players, Office, Costume & VIP) but when you start just the Players Party will be open.

All you need to do is pick gifts to reveal prizes. Ideally you will also find a plunger which will open another room and now each gift you click in that room will open the corresponding one in any other open rooms. The round is over when you pick the Pooper or the Buzzkill sign which will take you back to the base game.

All the features are triggered by scatter symbols so you won’t need to play all the paylines if you fancy some low rolling; more paylines mean bigger prizes though.

If you can ignore the slightly basic graphics then this is an entertaining game with a couple of nice features; especially nice is the fact that the Block Party feature seems to be quite profitable.