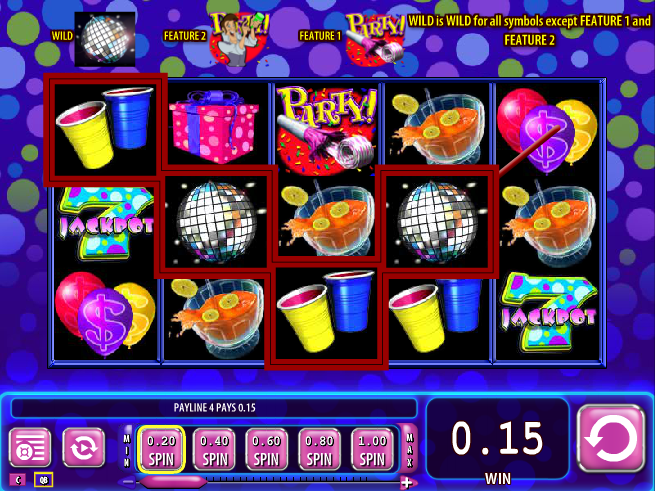 With Christmas and New Years Eve heading remorselessly towards us like a freight train, now seems like an excellent time to take a look at Super Jackpot Party, a colourful and cheerful online slot from WMS Gaming. Of course it may not be that time of year when you’re reading this but there’s always a birthday or some other occasion to celebrate.

Super Jackpot Party is certainly full of life and colour and it features five reels and twenty fixed paylines.  The symbols are all party-related and include some plastic cups, a bowl of punch (hopefully alcoholic), a bunch of balloons and a present tied with a blue bow. There are also there differently-coloured sevens and a the game’s logo which is worth the top base game prize of 25x the line bet.

There’s a glitter ball wild and two bonus symbols which trigger the same feature – a chap celebrating and a little noisy horn.

You need to land a combination of the two bonus symbols on reels one, three and five to start the long and comprehensive bonus round.

It’s all in the video below but to begin with you’ll see a screen filled with gifts and surrounding the people partying in the centre.  What you have to do is keep picking gifts to reveal rewards until you uncover three party pooper symbols which means the game is over.

All the other gifts reward you with the following prizes:

When you’ve picked three party pooper symbols you’ll get one more chance to continue by picking an item in the Party Favor round.  You’ll get a guaranteed win here but may also uncover a Party Saver item which will take you back to the Party Feature.

You can’t change anything here apart from the bet level so our advice is limited; all we say is keep the music on for that party atmosphere.

This game is all about triggering the Party Feature; if you can do that you’ve made it and it makes the game worthwhile. The risk of course is not triggering the feature but give it a go anyway.