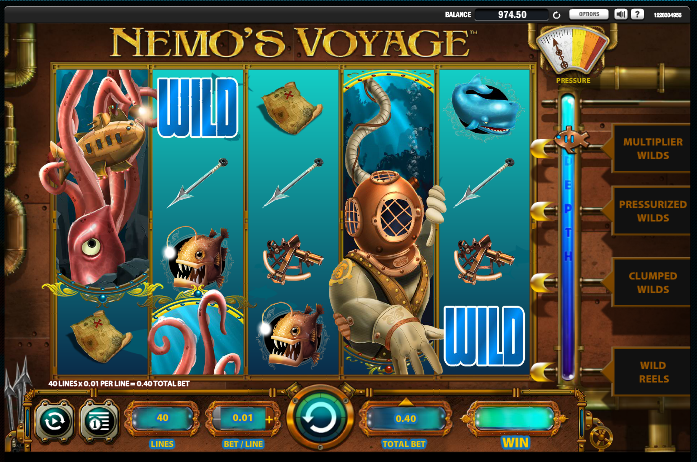 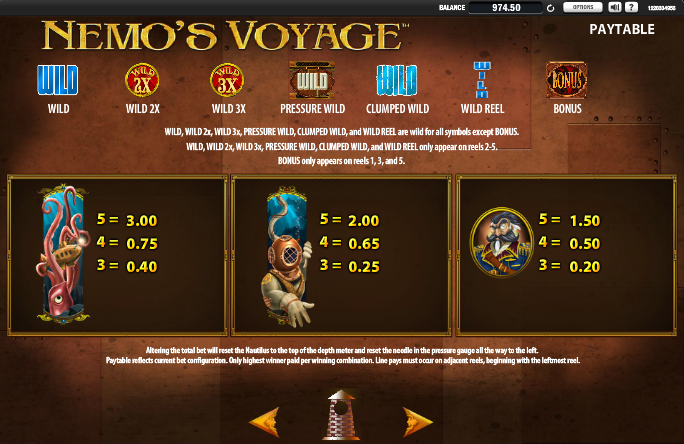 Captain Nemo is the fictional submarine commander created by Jules Verne; he made his first appearance in Twenty Thousand Leagues Under The Sea in 1870 and has remained a well-known character in popular culture ever since. Nemo’s Voyage is an online slot from WMS Gaming which takes us on a journey to the depths in The Nautilus.

Nemo’s Voyage is a five reel slot with four rows and forty fixed paylines; the design of this game is industrial Victorian and how one imagines the interior of The Nautilus. Fish of various sizes swim about behind the transparent reels.

The symbols are all related to the theme and include a harpoon, a map, a sextant, a Hammerhead shark, a Blue whale, Nemo himself, a deep sea diver and a giant octopus.

The wild symbol is a big blue ‘Wild’ and the scatter symbol is labelled ‘Bonus’.

To the right of the reels you will notice a pressure gauge under which is a depth gauge. With each spin the depth gauge will take you a little bit deeper into the gloomy depths passing various bonus feature on the way. These are:

The bonus symbol appears only on reels one, three and five but if you can land three there you will receive eight free spins.

A giant squid may appear during a free spin, pulling symbols off and replacing them with frozen wilds (called ‘persisting wilds’ here) which remain in place for the rest of the spins. This feature cannot be re-triggered.

This is a great game with graphics and sound effects very appropriate to the theme. The base game bonus features make you want to keep playing and there’s that tiny level of frustration when the pressure gauge begins to raise the submarine.

The RTP is variable here depending on how far down the depth gauge you are.