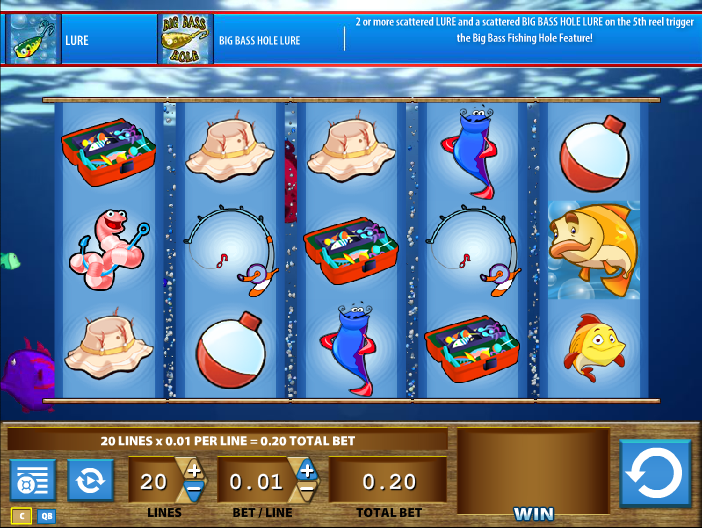 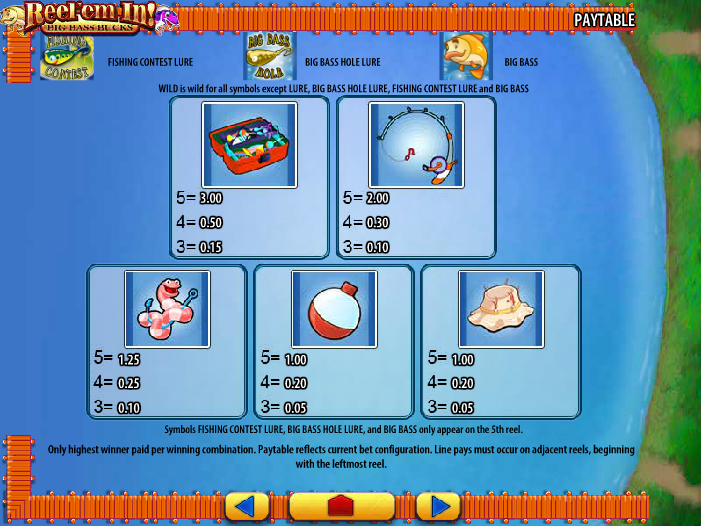 Fishing is an odd pastime and we’re always hesitant to apply to it the term ‘sport’. However fishing competitions seem to be popular and Reel ‘Em In: Big Bass Bucks appears to be based on the efforts of a number of fishermen and women to land as many as possible. It’s by WMS Gaming and it’s full of piscine bonus features.

Reel Em’ In is a five reel slot with three rows and up to twenty paylines; it all takes place under water and behind the reels one can see a variety of cheerful fish swimming from side to side.

The symbols are all fishing-related and include a fishing hat, a float, a worm on a hook, a fishing rod, a bait box, a yellow fish and a blue fish.

The big pink fish is wild and then there are several bonus symbols including the lure, fishing contest lure, big bass hole lure and big bass, all of which have a hand in the features.

This is triggered by landing three or more of the lure scatter symbols anywhere in view. You will now be shown five characters so pick one to reveal the number of casts that person has (three, four or five). Now you get that number of chances to fish by selecting which area to cast to. You may catch the following items:

This game is triggered by landing two or more lure scatters plus a Fishing Contest Lure on reel five or via the method mentioned above. You can now choose a character to take part in the contest with five casts.

Now cast the lure five times and try and win the competition. There’s a maximum of 50x your line stake available for the winner depending on the number of triggering symbols.

This game is triggered by landing two or more lure scatters plus the Big Bass Hole Lure on reel five. Depending on the number of triggering symbols you will will receive two and five casts so pick a character who will then fish that number times. Each catch will be a Big Bass and worth a cash prize.

This occurs when the fly appears above reel five which also contains the Big Bass. You will receive a random award of up to 10x the total bet.

This may be a little on the basic side but we can’t argue with the number of fishy bonus features wedged in to this game. Luck may have been on our side but we are yet to make a loss playing Reel ‘Em In. The RTP is 95.99%.