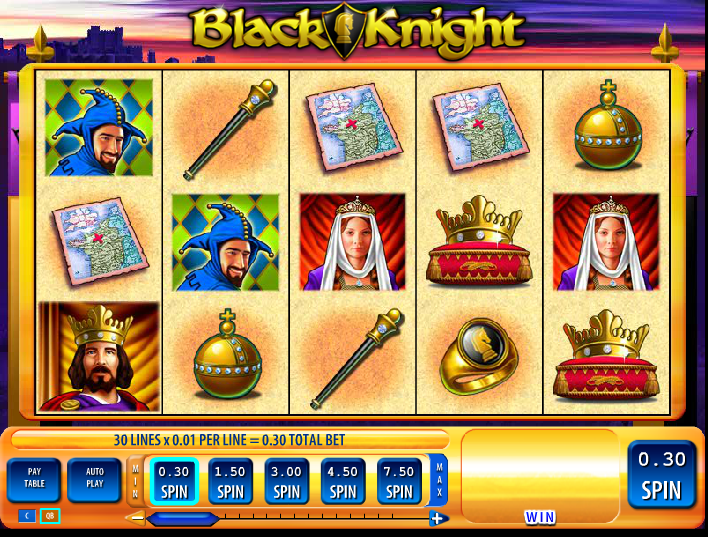 Black Knight is a medieval-themed online slot from WMS Gaming, a games developer more than capable of producing some addictive offerings.  Black Knight is a game which may appear to be based on a particular historical character but history buffs will know that no such person ever existed.  In this game the Black Knight is represented by the chess piece on a black shield.

Black Knight is a five reel and thirty payline slot and the reels are set against the backdrop of a silhouetted castle and a purple sky.  The major symbols are a selection of  medieval items and characters including a sceptre, a royal gold accessory, a map of France and England, a gold ring and a crown.  We also have a the King, the Queen and the royal jester.

Special symbols include the wild which is a gold chess piece on a black shield and the bonus, which is the be-helmeted knight himself.

With most slots games the wilds will only substitute for the basic symbols and that means that when it comes to triggering the bonus feature, wilds are largely irrelevant; you must, for example, land three of the actual bonus symbols to trigger the feature – wilds won’t count.

That’s not the case here and the knight wild will substitute for all symbols although it only appears on reels two, three and four.

So the free spins are triggered by landing three or more of the chess piece scatters (or wilds) anywhere on the reels and for that you’ll receive seven free spins.  Any wilds which appear on the reels during this round will expand to cover all places on that reel and remain in place for the duration of the spins.

Black Knight could be described as a little plain with a slightly run-of-the-mill bonus feature but it plays nicely and the soundtrack is certainly a relaxing one.  Those who prefer simpler slots will probably appreciate this game.