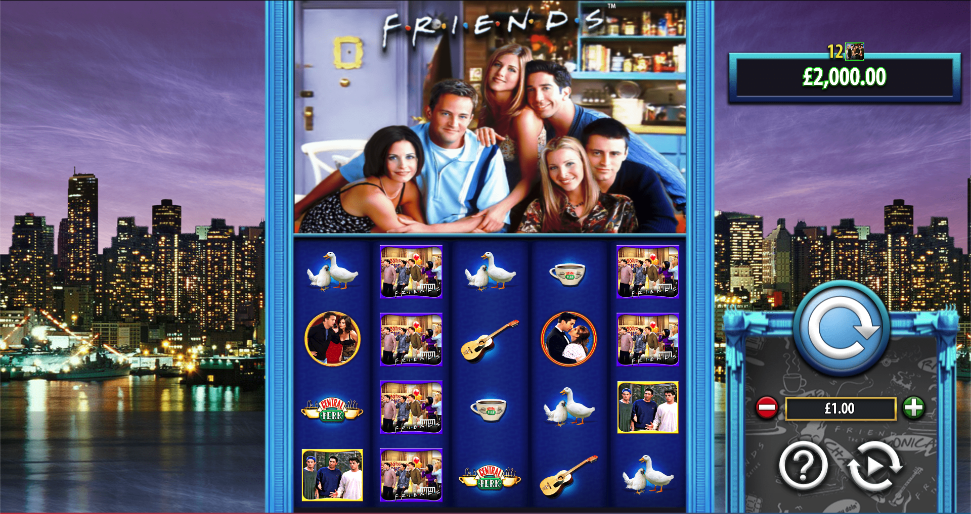 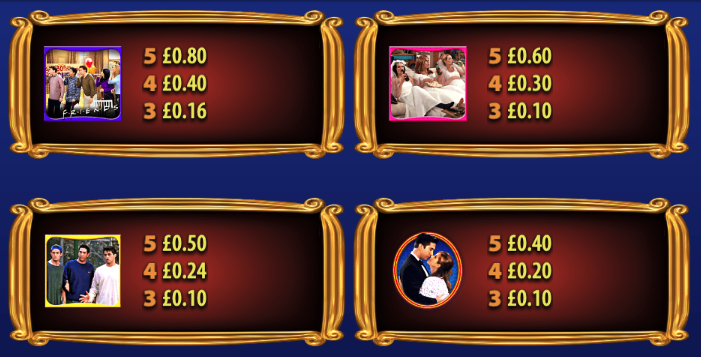 From 1994 to 2004 Friends was the sitcom which dominated the television schedules and even now we don’t have to trawl through too many channels to find an episode somewhere; it’s therefore entirely appropriate that WMS Gaming have developed an online slot dedicated to this show and it comes with themed features and a jackpot prize.

Friends is a five reel slot with four rows and forty fixed paylines; a picture of the six cast members takes up quite a lot of room above those reels while the backdrop is the New York city skyline in the setting sun.

All the symbols are related to the theme and include various group photos of our gang along with the duck and the chick owned by Joey and Chandler, the Central Perk logo, Phoebe’s guitar and a cup of coffee.

There are two wilds, the regular one and the jackpot wild – both will replace all standard symbols to help form winning combos but the jackpot wild only appears on reels two, three and four and landing three full stacks will award 2000x the line stake. The green and pink wheel is the bonus symbol.

On each spin there’ll a be Mystery Stack somewhere on the reels which will transform into one of the other symbols to help out; this can include wilds and bonuses.

Landing three full stacks of the pink and green wheel on reels two, three and four will trigger this feature and all you have to do is spin the wheel to reveal either a cash prize or one of the following Friends-themed features:

You have to credit WMS Gaming for shoehorning in as much Friends-related content as possible here and this slot will doubtless be popular among anyone who enjoyed the show; it captures the atmosphere and the sounds of the sitcom very well and there are some big wins available in the features.