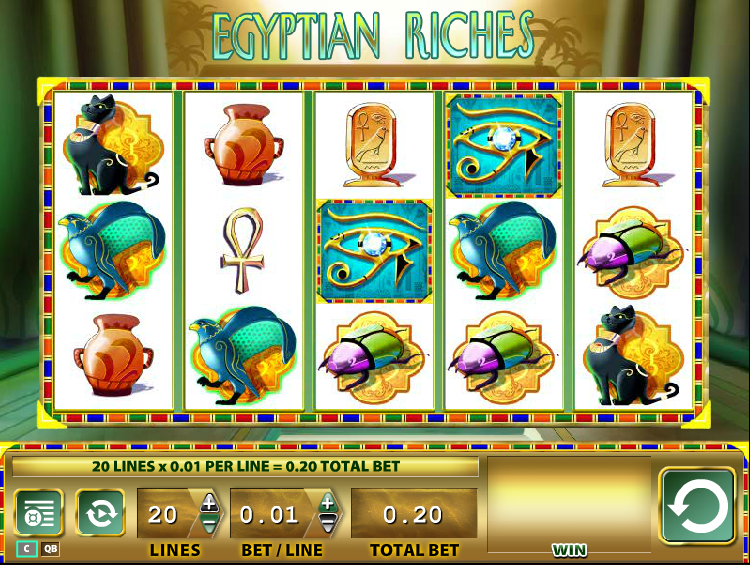 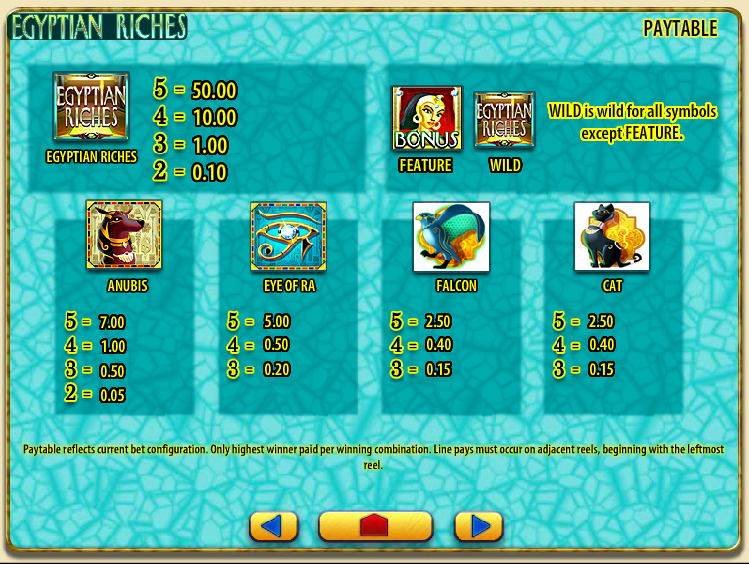 It’s been at least two weeks since we reviewed an online slot based on ancient Egypt so thankfully one more has come to our notice. This one’s called Egyptian Riches and not only does it join a long list in this particular genre, it’s from WMS Gaming who already have at least two themed on the same subject – Temptation Queen and Rome & Egypt. Still, there’s always room for one more.

Egyptian Riches is a five reel slot with three rows and up to twenty paylines; the backdrop is the interior of some palace but the view outside suggests palm trees and a hot day.

The base game symbols are all Egyptian and include the Ankh, Cartouche, a vase, a scarab, a cat, the falcon, the Eye Of Ra and Anubis.

The Egyptian Riches logo is wild and substitutes for all others except the bonus symbol which is represented by the Queen and activities the main feature.

This is the only extra feature and it’s triggered by landing three or more of the Queen scatter symbols anywhere in view. You will also receive a scatter payout for the combination.

You will now be shown five scarabs and asked to pick one for a cash prize. A second part now takes place in which you chose from a number of treasures on the screen. Each pick will reveal a cash prize, ‘Pick Another’ or ‘Collect’. You can continue collecting treasures and scarabs for prizes until you find the ‘Collect’ at which point your prizes will be totalled and the round is over.

We think it’s fair to say that this is not the best Egyptian-themed slot available or in fact WMS Gaming’s best attempt. Both those mentioned above are better and the real drawback here is the difficulty of reaching the bonus round.