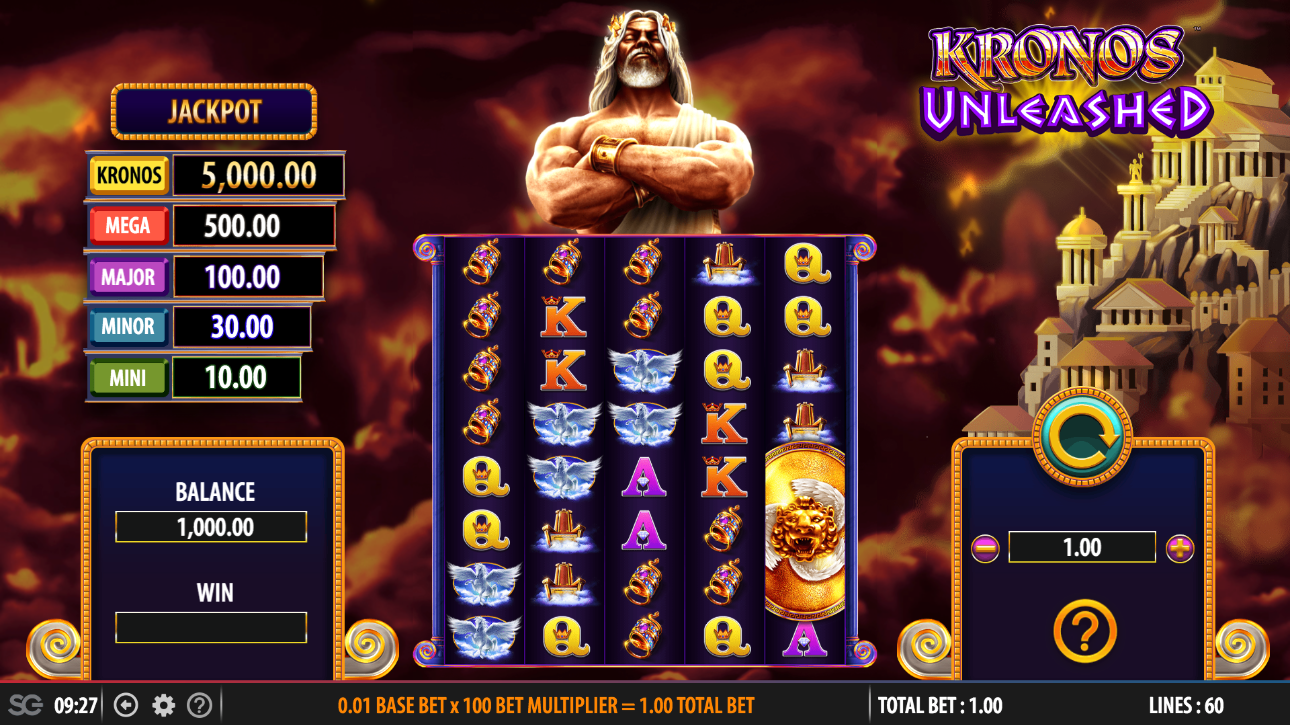 Courtesy of WMS Gaming, the leader of the Titans and father of Zeus has returned to us after his outing in the original Kronos slot; this time it’s Kronos Unleashed and he’s back with plenty of free spins and a godlike jackpot to aim for – check it out below.

Kronos Unleashed is a five reel slot with eight rows and a potential one hundred paylines; those reels occupy quite a small portion of the available screen space which is otherwise taken up by large boxes displaying your balance, your stake and the various jackpots available. Behind all that is a fiery backdrop with the home of the gods on the right hand side.

The higher value symbols include the winged Pegasus, the lion, Kronos’ throne and one of his bracelets; J, Q, K and A make up the lower values.

The temple is wild, it appears only on reels two, three and four and it will substitute for all others to help form winning combinations except for the Kronos and lion’s head scatter symbols.

Trigger this by landing a stack of at least six Kronos symbols on reel one and you’ll receive three Lighting Respins; during this round only Kronos, a gold power-up symbol and blanks appear on the reels. A power-up landing will transform into one of four symbols which will add more Kronos symbols to the reels, trigger a chance to win the jackpot, add more rows (and consequently paylines) or increase the value of Kronos. Respins may also be awarded.

This is triggered by landing three or more of the lion’s head scatter symbols anywhere in view and the number of spins is determined by a rather complex ‘boxing’ process in which scatters which are in adjacent reels and overlap each other count towards more spins. We’re not clever enough to work out the maximum number of spins possible but it’s a lot.

Kronos Unleashed is a dramatic slot to be sure but it seems to over-complicate things a little; still, it looks good and if you’re a fan of complex bonus features and this theme in particular, give it a go. It comes with an RTP of 95.86%.