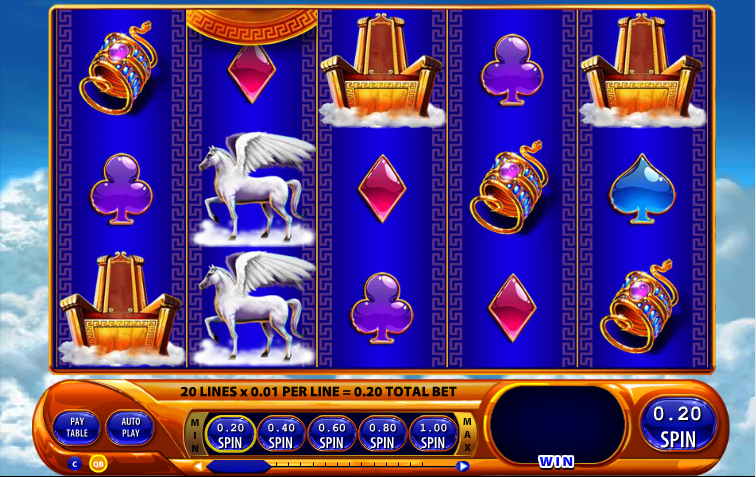 Kronos is a colourful new online slot from WMS Gaming and’ like some other slots we’ve reviewed, it’s based on tales of Greek mythology.  Greek gods were a lively bunch and Kronos was the leader of the Titans, the original descendants of Gaia; he was also the father of Zeus who eventually replaced him by force and imprisoned him in Tartarus.

So that’s a brief lesson on Greek mythology but what about this slot? Well it’s features five reels and twenty paylines and behind the ornate reels we can see clouds and a blue sky.  The main symbols are an ornate ring, a golden throne, Pegasus (the winged horse), Kronos himself and Olympus – the home of the gods.

Special symbols are the huge gold medallion which activates the free spins and the roaring lion wild which appears on reels two, three and four.

The Kronos slot includes a nice feature which is symbols that stack on top of one another on the reels.  You will notice as soon as you start playing that there seem to be loads of Kronos symbols on the reels but other symbols are stacked as well.

Stacked symbols give you a greater chance of forming winning combinations.  If you create a winning Kronos combo he will spread over the reels in all his godly glory.

The free spins are triggered by landing three, four or five of the big gold medallions anywhere on the reels and you’ll receive the following:

One hundred spins is what you’re aiming for but one of the lesser amounts is probably what you’ll end up with.  Unfortunately you can’t re-trigger more free spins while playing this bonus game.

Kronos is a fairly basic game but it has a relaxing soundtrack and it’s enjoyable nonetheless; the stacked symbols feature add as much invention as the free spins so give it a go.