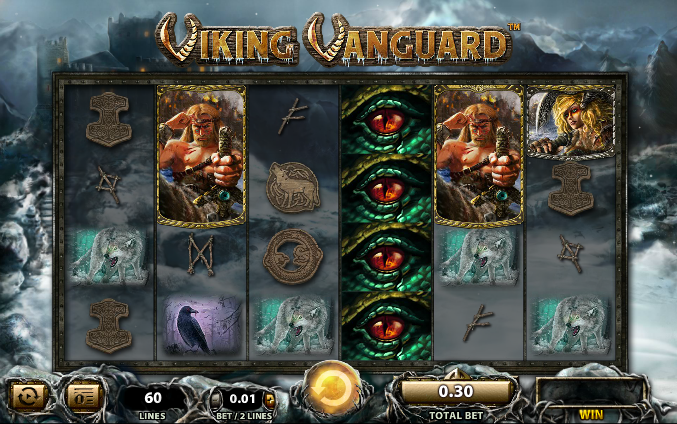 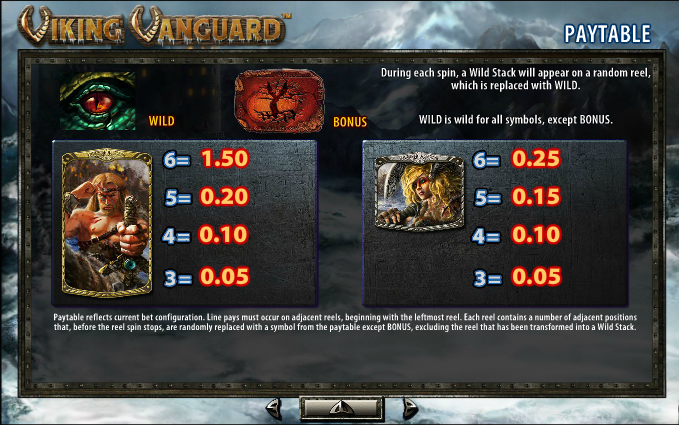 The setting for this online slot from WMS Gaming is some sort of snowy, mountainous landscape – the sort of place Viking hordes would aim for if they headed south from Scandinavia. Viking Vanguard is the name of this game, it features some lovely intricate graphics so keep reading to find out all about it.

Viking Vanguard is one of those rare slots with six reels rather than five, four rows instead of three and an impressive sixty paylines. The background to those reels is a chilly-looking landscape complete with imposing castle, lofty peaks and snow drifting across the screen.

There’s a nice range of theme-related symbols on show including the main male and female characters, a wolf, a raven, three intricate metal designs and three different runes.

The wild is represented by a dragon’s eye and on every spin it will appear stacked on one reel. This means that the symbols appear on top of each other, giving the player more chances to make winning combinations. If the wild reel can form a win it will turn into an animated dragon.

The scatter symbol is a red tree symbol and it’s the key to activating the feature.

Landing three or more of those red bonus symbols anywhere on the reels will kick this feature off and you will receive the following for your efforts:

The reel which was wild when the spins were triggered will remain wild for the duration of the spins. As an added bonus, one to five of the remaining reels will randomly be turned wild, giving the player major opportunities for big wins.

We can’t offer much here because there’s no player interactivity at all but we would recommend keeping the sound on to experience the dramatic music.

Viking Vanguard looks and sounds really impressive and the six reels and four rows make for a slightly different gaming experience. Perhaps it lacks a little when it comes to creativity but it’s enjoyable nonetheless.