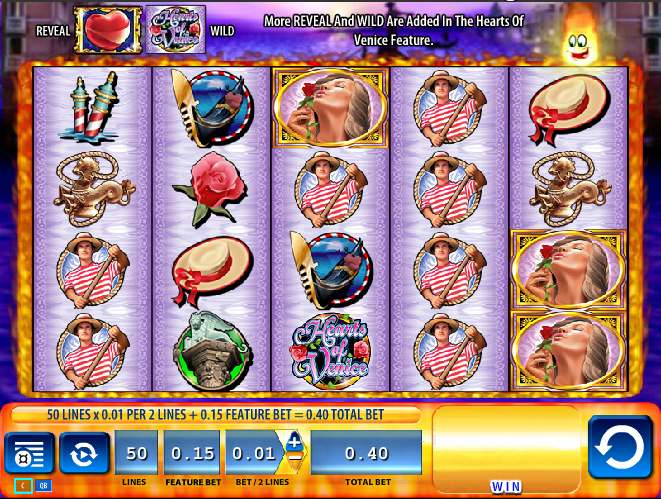 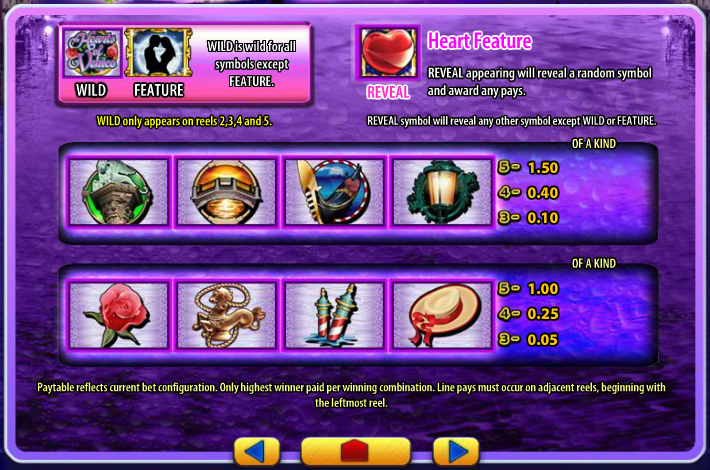 Romance and a stunning historic location come together in this brand new online slot from WMS Gaming; it’s called Hearts of Venice and it’s theme is that architectural wonder off the north east coast of Italy.  Once the centre of a powerful state, it’s now one of the world’s great tourist destinations.

Hearts of Venice is a five reel slot played over fifty fixed paylines and it features a Hot Hot Super Respin which we’ll explain a little later.  The symbols all relate to Venice or romance and include a gondoliers hat, a rose, a streetlight, a bridge and a winged lion on a plinth.

Bonus symbols include a Hearts of Venice wild, a silhouetted couple which triggers the feature and a bright red heart which changes into other symbols.

Opting to play with this activated will cost you a little extra on top of your total stake but it’s well worth while; when reel one is filled with the stacked heart symbol it will stay in position for two respins.  During these respins any more hearts or wilds which land will stay in position.

When the spins have finished the hearts will change into another symbol and any winnings will be paid.

Even if you don’t activate the respin feature, any hearts landing on the reels will change into another symbol, hopefully helping create a winning combo.  As you can see from the video below, it’s also possible to trigger the respins from within the free spins.

The silhouetted couple is the scatter symbol and landing three anywhere on the reels will reward you with ten free spins.  More wilds and hearts are added to the reels for this feature and it’s also possible to re-trigger the spins by landing more scatters within this round.

You can never leave the free spins empty handed because there’s a guaranteed minimum win of 400x your line bet! Nice.

The paylines are fixed so there’s not much advice to offer here except to say make sure you pay the little bit extra for the Hot Hot Respins feature – it’ll add some extra excitement to the gameplay.

The Hot Hot Super Respin gets triggered so often it really adds an extra dimension to the proceedings; you might not win every time but that’s the way it goes.  The minimum win during the free spins is also a nice touch.