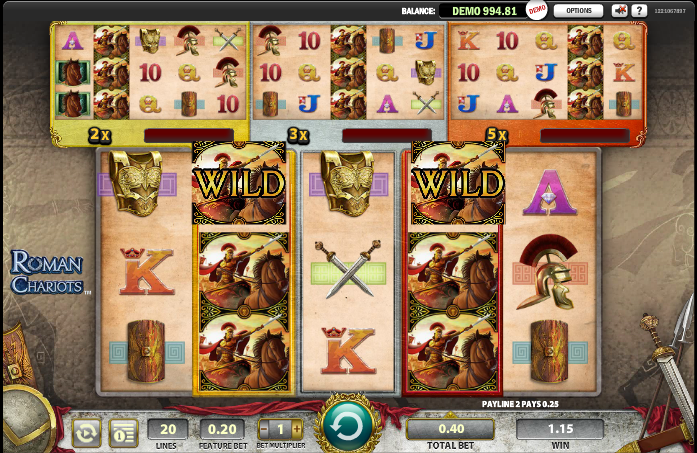 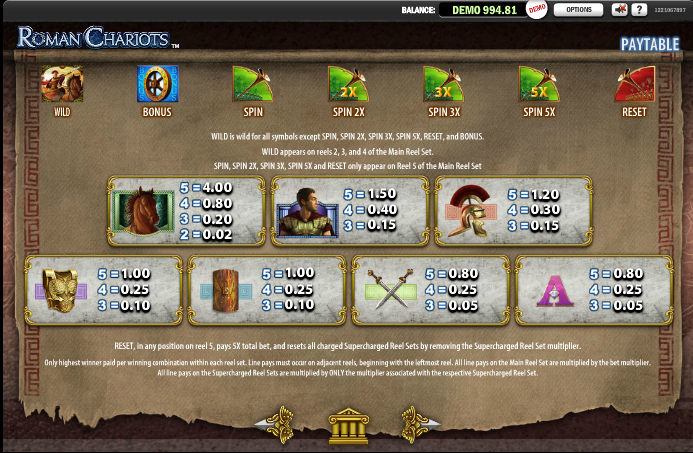 The full version of Roman Chariots has finally reached us a number of weeks after we first saw it and we think it’s been worth the wait. It’s a brand new online slot from WMS Gaming and there are no prizes for guessing what the theme is. Chariot racing is what it’s all about but there’s more to it than Ben Hur and spiky wheels so read on for more information.

Roman Chariots is a five reel and twenty payline slot and those reels are set against an illustrated parchment full of Roman soldiers. You will also notice the three smaller reels sets above the main one but we’ll get to that further down.

The main symbols are crossed swords, a shield, a breast plate, a helmet, a charioteer and a horse. Lower values are the standard 10, J, Q, K and A.

The wild symbol is the complete chariot and it can appear stacked on reels two, three and four; there’s also a bonus symbol which appears on reels one and five. Reel five also contains the green ‘spin’ and the red ‘reset’ symbols.

Landing a full reel of stacked wilds on reels two, three or four will activate the yellow, blue and red smaller reel sets respectively. Each successive stacked wilds you land will increase the multiplier for it’s matching smaller reel by 1x and the stacked wild will appear on those reels in the same position as in the main set.

Nothing happens on the smaller reels until you land the free ‘spin’ symbol on reel five. This will award you with up to five spins on all three small reels.

Eventually you will land the red ‘reset’ icon on reel five and it will reset all the smaller reels back to their original state, ready to start again.

Eight free spins are available for landing the bonus symbol anywhere on reels one and five. The extra bonus here is that there is no reset symbol so you have all eight spins to try and build up winnings using the smaller reels.

All wins will be multiplied by 2x and more spins are available by landing more bonus symbols.

WMS Gaming have a habit of sticking something creative into their slots and that’s the case here. It works very well because there’s always something going on and plenty to hold your attention. A few free spins are always welcome as well. The background sound effects seem to be the noises of a large battle.