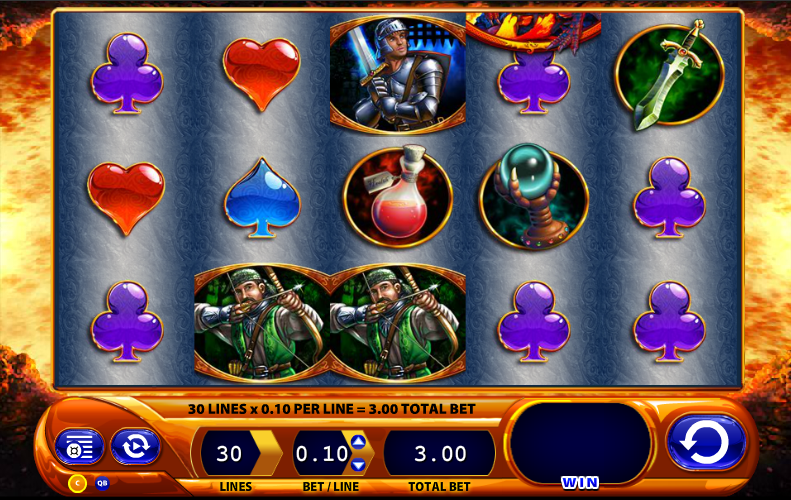 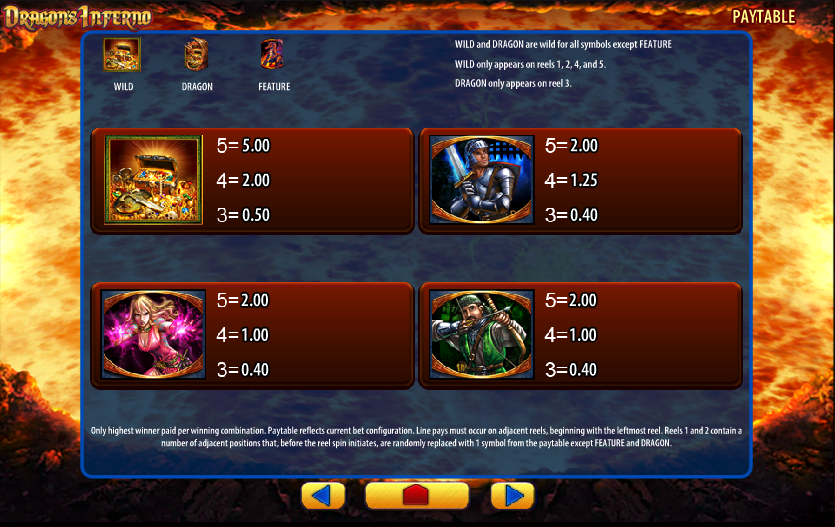 Dragon’s crop up in online slots every now and again and they’re always a handy addition when a fre-breathing monster is required; Dragon’s Inferno from WMS Gaming joins this small but exclusive club and it’s fair to say that the animated beast in this particular game looks fantastic . There are also two distinct bonus features for those looking for a little extra.

Dragon’s Inferno takes place over thirty lines and five reels and it’s all set against a fiery cave background; the basic symbols are a collection of shiny hearts, diamonds, clubs and spades but the higher values are all them-related and include a red potion, a crystal ball, a green-tinged sword, a spell book and then three characters – a knight, a magician and an archer – who are presumable hunting the dragon and his treasure.

One of the bonus symbols is a dragon guarding the gold while the other is the dragon in all his glory and he activates the main feature. There’s also a pile of gold and jewels which is wild and only appears on reels 1, 2, 4 and 5.

Let’s kick off with the free spins then and these are triggered by landing three, four or five of the big dragon symbols anywhere on the reels. You will receive respectively 10, 20 or 40 spins and during this feature all wins will be doubled.

Stacked symbols may appear on reels one and two while this rounds in progress which should help your quest to create winning combos. Additionally the Replicating Wilds feature is available during this round – read below for more info.

The symbol with the dragon guarding his treasure only appears on reel three but if you land it you will trigger this added extra; he will turn a a random number (usually around 5 or 6) of symbols into matching ones and the reels will then be re-evaluated. You can see this in action in the video below.

If you play with the maximum number of paylines you will give yourself a greater chance of triggering the replicating wild feature; the RTP will remain the same but it will make your gameplay more exciting.

This game looks good and plays well; a bit more imagination with the soundtrack would be nice but there are two decent bonus features and some nice animations to keep you amused.