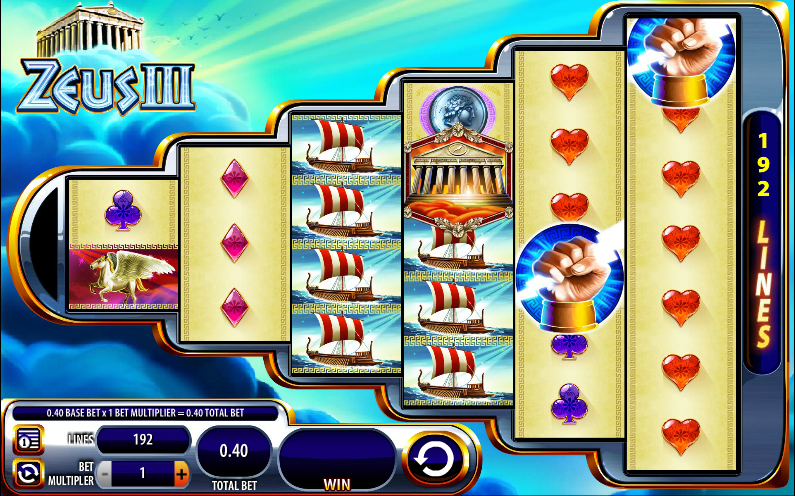 If you’ve played Zeus I and Zeus II then the logical progression is to have a punt on Zeus III, an online slot from WMS Gaming with Greek gods as it’s theme. The is a company with a tradition of using some unusual reel structures and this new game is no exception. Read on to find out what we thought of it.

Zeus III takes place over six reels and one hundred and ninety two fixed paylines and you can see the shape of the playing area from the screenshot above. Reel one has just two rows and each reel to the right adds an extra one with seven on reel rows on reel six.

The game uses WMS Gaming’s shiny playing card icons for the low value symbols but there are the usual ancient Greek objects higher up the ladder including a coin, a vase, a helmet, a ship, the Pegasus and Zeus himself.

Zeus acts as a wild if he covers up an entire reel in the base game but there’s also a standard wild represented by a temple. The scatter symbol is Zeus’ hand clutching a lightning bolt.

Lots of godly free spins await those who can land the lightning bolt scatter symbols anywhere on reels two to six in the following number:

When the spins start you will notice that the reels swap positions horizontally, meaning that reel one has seven rows and reel six just two.

Landing three or more scatters on reels one to five during the feature will add five extra spins to the total number.

Everything is fixed here so there’s nothing the player can do to maximise their winning chances. Keep the sound turned on though for the dramatic, high quality music.

This is a really interesting reel structure and well worth devoting some time to; wins can seem a little hard to come by in the base game because of the the smaller number of rows on the left reels but are worth more when they do hit.