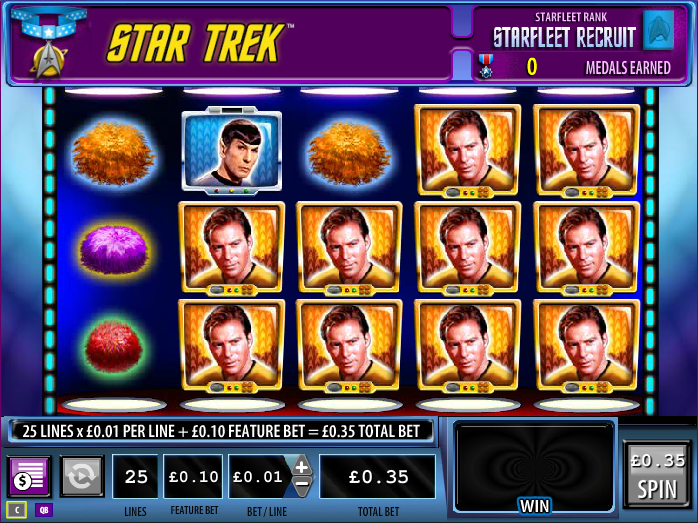 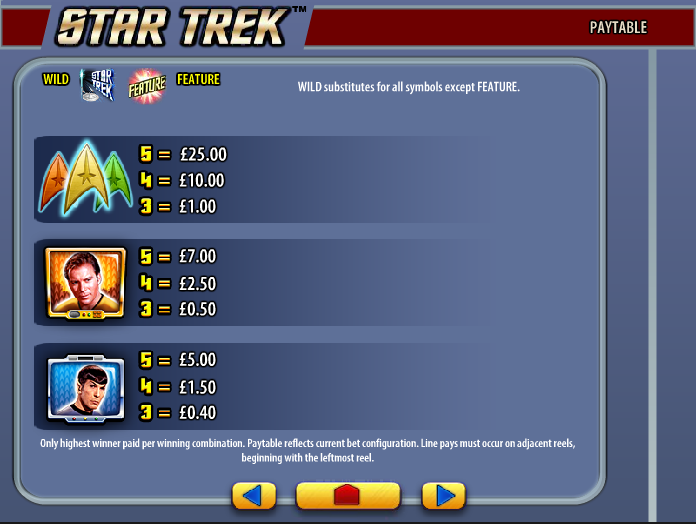 If you’ve played WMS Gaming’s range of Star Trek-themed online slots then you’ll probably know what to expect from Star Trek: The Trouble With Tribbles. The design is similar to the previous games but here we have the welcome return of the Tribbles, the small, furry creatures who reproduce at amazing speeds, threatening the future of Starfleet and their Vulcan allies.

Star Trek: The Trouble With Tribbles is a five reel slot with three rows and twenty five fixed paylines: the design is basic but reminiscent of that Star Trek atmosphere and rather than the reels spinning, the symbols are beamed down on to the playing area in a pleasing manner.

There are six high value symbols including the Starfleet insignia, Captain Kirk, Dr. Spock, Lt. Uhura, a crew member we can’t quite place and a spacecraft; the lower values are three of the colourful Tribbles.

The game’s logo is wild and will substituted for all others except the ‘Feature’ icon which activates one of the extra games.

This is triggered by landing three or more of the Feature scatter symbols anywhere in view; it’s really more like pachinko then pinball and on the screen you will see Tribbles fired onto the playing area where they bounce and drop into one of the tubes at the bottom. These offer cash prizes, the ‘Door’ feature or ‘Collect’ which will end the round. The Door feature is a picking round which offers more cash prizes and multipliers.

This costs an extra 10x your line bet and is awarded randomly when the player creates a winning combo – there are four possible features available:

You will notice at the top of the screen that more episodes are available if you can collect medals; medals are awarded each time the feature is triggered.  Collecting enough therefore takes some time and your account will save your progress each time you return to play the game.

These games are a must for Star Trek fans and frankly they’re good fun even if you’re not interested in the adventures of the Starship Enterprise. The features are enjoyable and well-thought out so check it out.