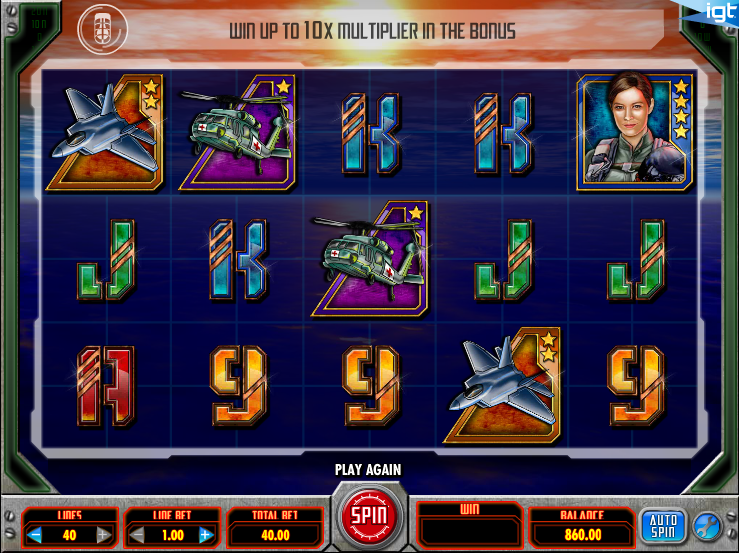 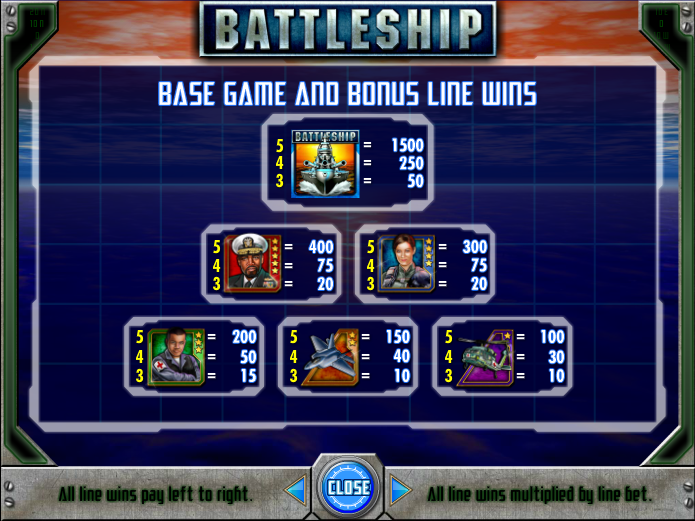 The game of Battleships has long been a traditional favourite – all you need is two players, some pens and paper and the ability to draw a grid. Place your ships on the grid and you and your opponent can then try and destroy each other’s ships. WMS Gaming’s Battleships isn’t really like that at all apart from a section of the bonus game during which you fire missiles at enemy ships, but it’s good fun nonetheless.

Battleships has five reels and forty paylines and the reels are set in a transparent grid through which the player can see the sea and the setting sun. The basic symbols are the usual 9, 10, J, Q K but higher up the scale we have a helicopter, a fighter plane, a medic, a pilot, the captain and the battleship. That battleship is the wild symbol and there’s also a glowing bonus scatter symbol which activates the bonus feature.

If the wild symbol appears twice in a winning combination, the prize will be doubled. The wild is also stacked so it can appear on top of one another on the reels.

There’s two parts to this feature and to trigger it you’ll need to land three, four or five of the scatter symbols anywhere on the reels. You will the receive 2, 3 or 4 missiles respectively.

Ini the first part of the feature you can pick as many ships to aim at as you have missiles while each ship will also be auto-targeted once by the game. All missiles will hit their target and will reveal free spins, multipliers or a cash prize.

The second part of the feature is the free spins and these will start automatically as soon as the missile part has finished.

The bonus feature is triggered by scatter symbols so you don’t need to play maximum paylines to be able to activate it; your prizes will be greater though the more paylines you play.

Triggering the feature is the main aim of this game and it’s a good earner if you can manage it; the graphics and animations are good but not quite top drawer and there’s plenty of appropriately warlike noises and sound effects.