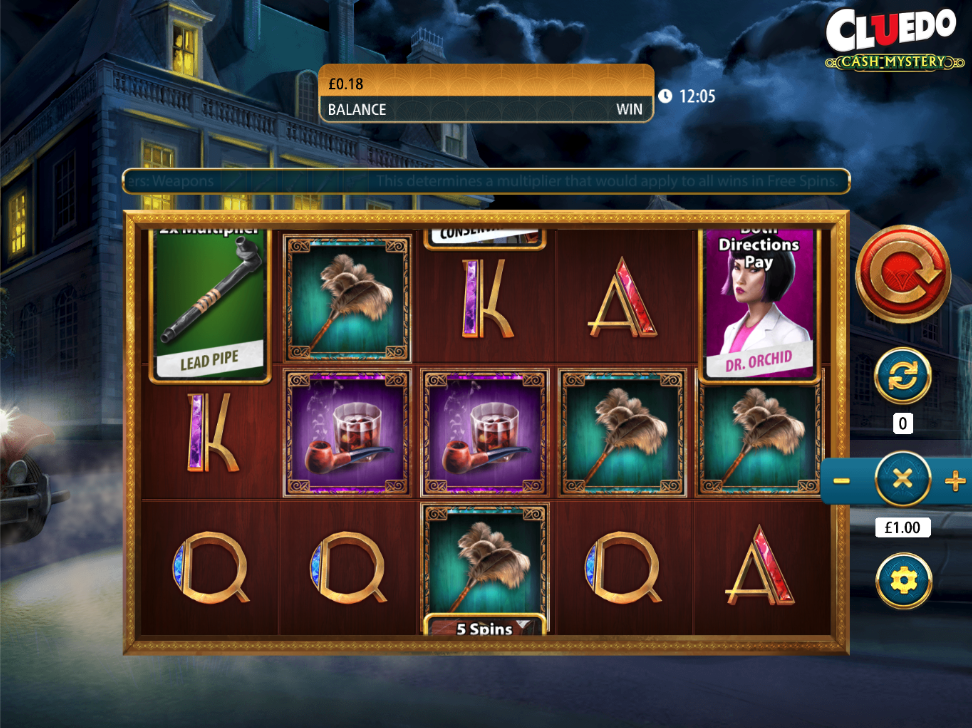 Cluedo is the timeless board game in which players must use logic and deduction to determine the murderer, the weapon used and the location; it’s a game which has crossed paths with the world of the online slot before and it does so again here with Cluedo Cash Mystery from WMS Gaming; it’s all about the combinations of free spins which can be won by collecting the three special cards.

Cluedo Cash Mystery is a five reel slot with three rows and twenty fixed paylines; the vast stately home in which the crime has been committed forms the backdrop to those reels.

There are only six standard symbols comprising the Cluedo logo, the pipe/brandy, the feather duster and Q, K and A; the gold Art Deco ‘Wild’ is wild and then there are seventeen scatter symbols which we’ll talk about below.

This is where the multitude of scatters come into their own and we’ll start by explaining that the five murder weapons only appear on reel one, the six rooms appear on reel three and the six potential murderers appear on reel five. Landing one of each set on their respective reels will trigger the free spins round and there are of course lots of combinations of the following awards:

….and just a quick explanation of what those awards associated with each character are:

This is an interesting combination of board game and online machine and of course it all revolves around the variety of free spins on offer if you can trigger the feature; it’s entertaining stuff and highly recommended.