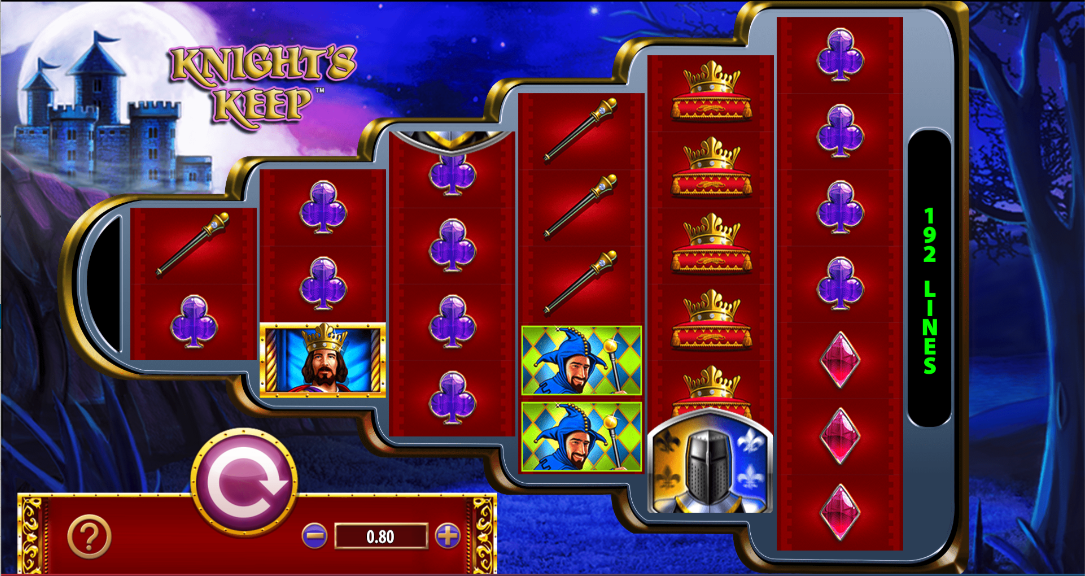 Many things were missing from life in the dark ages – hygiene, clean water, safety from marauding barons – but one of the most noticeable absences was the online slot machine, unfortunately not invented until hundreds of years later; Knight’s Keep is developed by WMS Gaming and it takes us back to those simpler times and offers free spins along the way.

Knight’s Keep is a six reel slot with variable rows and 192 paylines; as you can see from the screenshot above the design is like a pyramid which has fallen over with the number of rows increasing towards the right hand side. A castle looms in the glare of the full moon in the background.

The high value symbols include the King, the Queen the jester, the crown and the sceptre; playing card symbols in blue, pink, purple and red represent the lower values.

The Knight is wild and he’ll replace all other symbols to help form winning matches except for the gold horse shield bonus icon.

The shield bonus symbol appears on reels two to six in the base game and landing at least three anywhere on the same spin will award the following:

The fun starts now because the reels flip over meaning that there are now seven rows on reel one and just two on reel six – this makes it considerably easier to form winning combinations. It’s possible to retrigger the bonus but now the shields appear only on reels one to five.

Eagle-eyed players may recognise the reel design from the ever-popular Zeus III but it worked well there and it does so here – wins are quite rare in the base game but plentiful in the free spins.