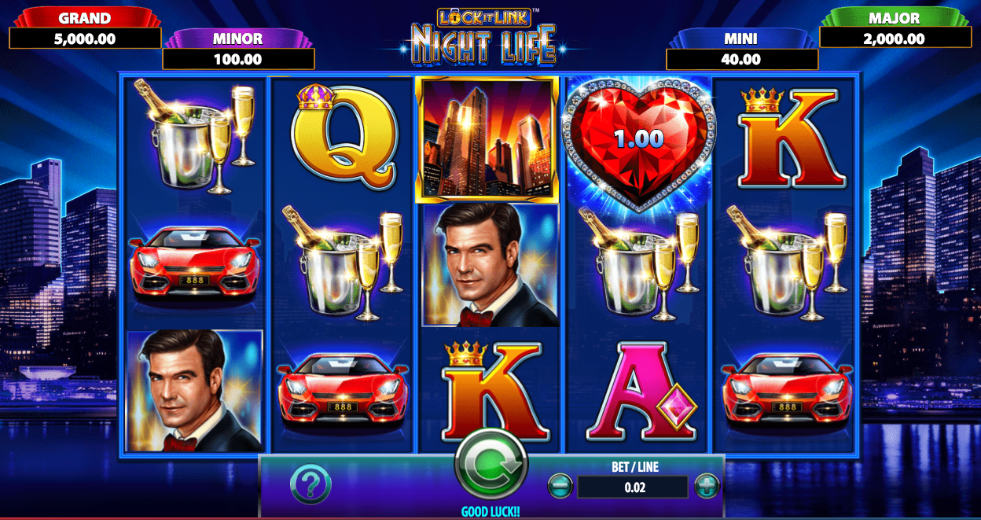 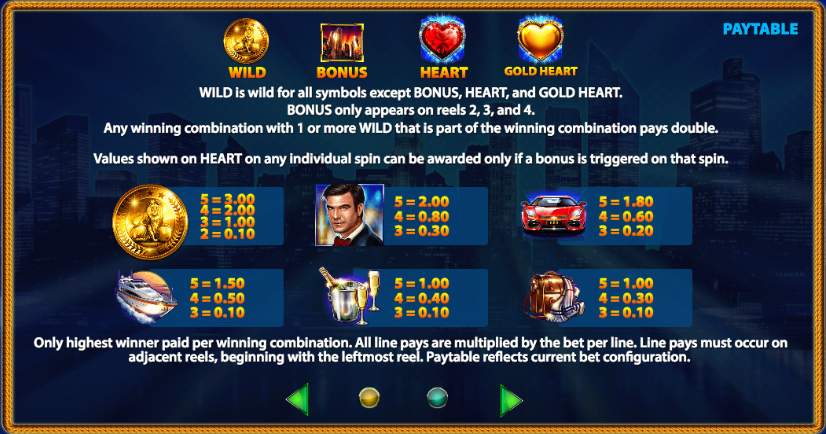 The titles of some online slot machines may seem like a string of random words stuck together but they generally make sense in the end; this is one such game, it’s called Lock It Link Night Life, it’s developed by WMS Gaming and it comes with some interesting bonus features.

Lock It Link Night Life is a five reel slot with three rows and fifty fixed paylines; the theme is one of luxury with plenty of expensive symbols on the reels and a backdrop displaying a cityscape of skyscrapers overlooking a calm bay.

There are six theme-related symbols and they include a suave chap, a posh car, a huge yacht, some champagne and a luxurious leather case; J, Q, K and A make up the lower values.

The wild symbol is a gold coin which will replace all others to form winning combos except for the buildings bonus icon and the red and gold hearts; the wild will also multiply by 2x any wins to which it contributes.

Landing three of the buildings bonus symbols anywhere on reels two, three and four will award the player 5x the total bet and the choice of two features as follows:

Six free spins are awarded which may be retriggered by landing three bonus symbols again during this round; any wins during the free spins are subject to a multiplier depending on how many wilds are on the reels:

To begin with one spin is awarded on a set of reels which will guarantee three, four or five red heart symbols as the starting point. These will now be locked together and awarded a monetary value and the three, four or five spins will start. Any new hearts landing will be frozen in place and when the spins have finished you will be awarded the combined value of all those hearts.

During the base game and Lock It feature a gold heart may appear on reel three; this can if a Grand, Major, Minor or Mini heart appears on a gold heart on the same row which triggered the feature, you’ll win that particular jackpot.

Lock It Link Night Life just about makes sense in the end but it’s probably best to play it for a bit to get a proper feel for what’s going on; however it’s a little different so it’s worth checking out and it comes with an RTP of 96.02%.