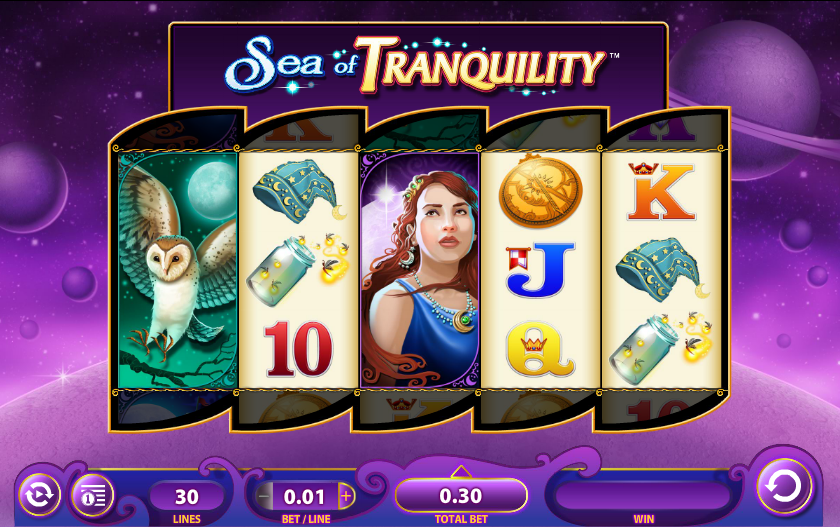 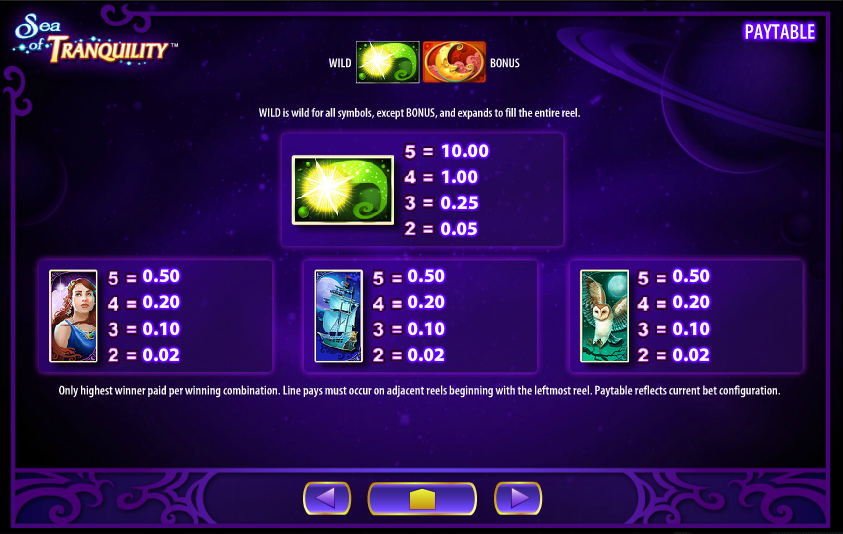 As any self-respecting online slots fan knows, the Sea Of Tranquility is a basin feature on the moon surrounded by lofty peaks. This brand new game from WMS Gaming is not exactly based on the moon but that celestial body plays a big part here anyway, featuring in many of the symbols. The bonus features here include an interesting new  extra called ‘Close Enough’ which we shall explain below.

Sea Of Tranquility is a five reel and thirty payline slot played out against the backdrop of a purple universe. Planets orbit in the distance but presumably the moon is the big rock occupying the bottom of the screen.

The main symbols seem to be related to the moon (or at least nighttime) and include a night-cap, a jar of fireflies, a gold object, an owl, a ship under the moon and an obligatory girl.

The wild is represented by a green shooting star and a stylised moon is the scatter symbol which activates one of the feature.

You will notice that above and below each reel there is a limited view if another row; if a wild or scatter symbol appears here it will be active. In the case of the wild it will expand to fill the whole reel, similar to the way it would if it appeared in the normal view.

No other symbols are affected by this feature.

Fancy some lunar free spins? They can be yours by landing two or more scatter symbols anywhere from left to right:

During the spins the girl, ship and owl will all substitute for each other, offering extra winning opportunities. The spins can be re-triggered by landing two or more scatters during this round.

Low rollers can take advantage of the fact that the free spins are triggered by scatter symbols so they don’t have to be on an active payline. Use just one payline if you want but of course the payouts will be proportionately lower.

We like the laid back music and the eclectic range of symbols; we also like the innovative ‘Close Enough’ feature. It won’t increase your winning chances of course but it adds an extra layer of interest.