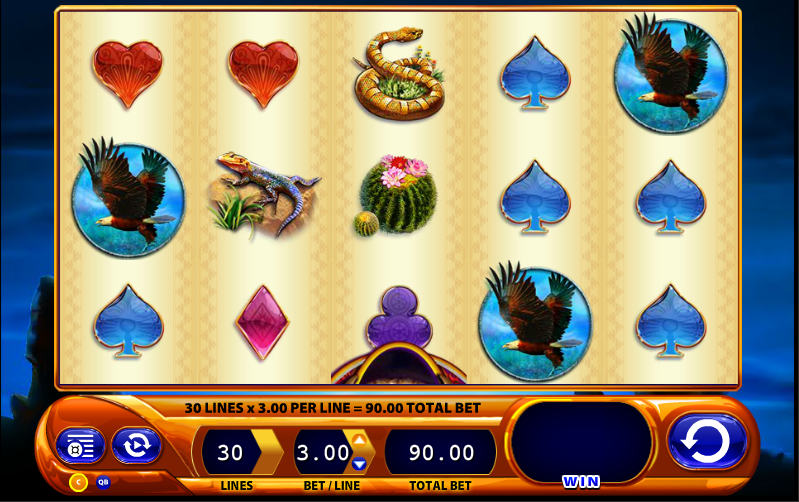 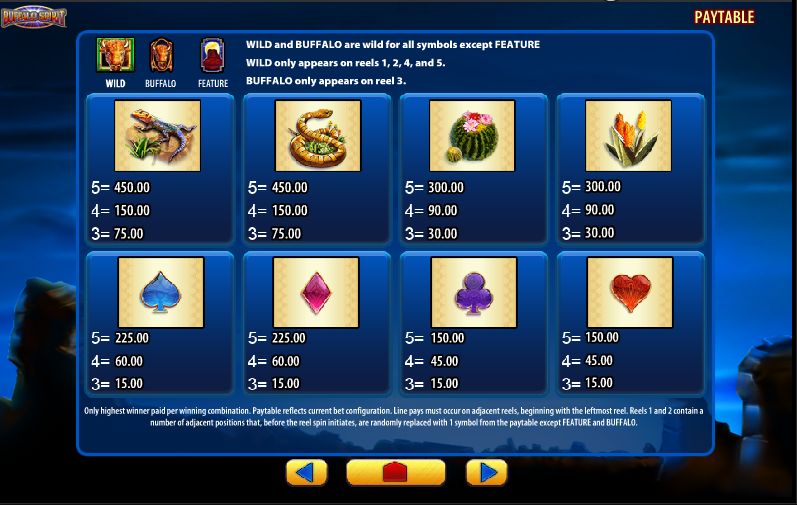 It’s been a little while since we’ve reviewed a buffalo-themed online slot and so coming across Buffalo Spirit recently was a pleasant surprise. We don’t have an unhealthy penchant for buffalo or anything like that but there is something majestic about these creatures. Anyway this is from WMS Gaming, a company who know how to make an animal-themed  slot so read on to find out more.

Buffalo Spirit plays out over five reels and thirty fixed paylines and that means there’s a minimum stake of €/£0.30 per spin. A massive dusk sky occupies the space behind those reels and this is the buffalo’s native environment.

The main symbols are a yellow desert plant. a cactus, a dangerous-looking snake, a lizard, an eagle, an owl and a fox. Lower values are WMS’ standard playing card icons – hearts, clubs, diamonds and spades.

There are two different buffalo wild symbols and a scatter icon which is the moon rising behind a stone stack.

There’s lots of free spins available here and to trigger them you will need to land three, four or five of the moon scatter symbols. You will win the following:

All wins earned during this feature will be doubled and it’s also possible to re-trigger the feature by landing more scatter symbols. Reels one and two also contain extra matching symbols which should increase your chances of winning.

The buffalo wild symbol only appears on reel three (the standard wild is on reels one, two, four and five) and when it does it will kick off this feature. It will fire little orbs around the reels, changing other symbols into ones which match each other for guaranteed wins.

This feature can also occur within the free spins.

The replicating wild feature adds an extra layer to what could have been a fairly basic machine; it seems to occur with sufficient regularity and decent wins seem to happen often enough. If you like buffalo and you like slots, this is for you.