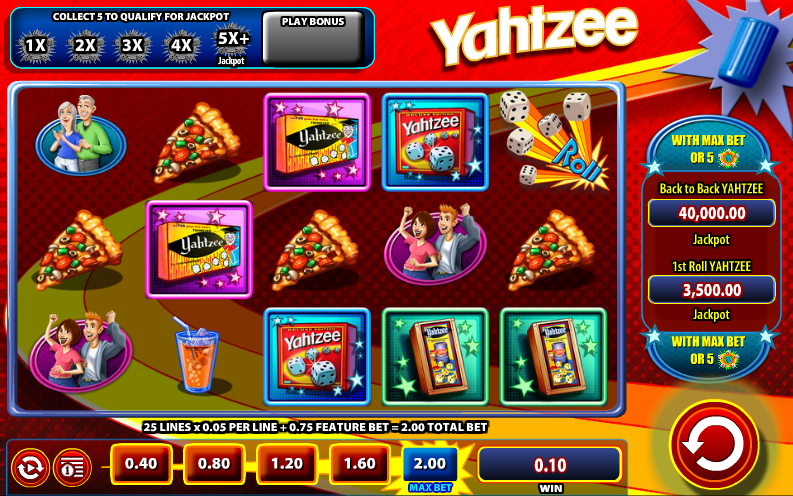 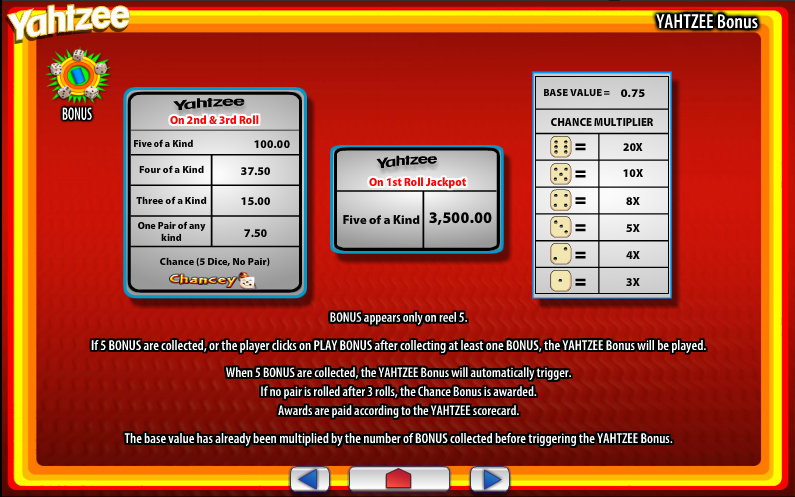 Lots of traditional board games have made the transition on the reels – we’ve played online slots based on Cluedo, Snakes & Ladders and any number with Monopoly as their theme. Yahtzee is a brand new one though, it’s from WMS Gaming and it’s a real mixture of slot and board game with riles almost as complicated as the original pastime itself. Read on to find out more.

Yahtzee plays out over five reels and twenty five fixed paylines and the whole game screen is designed to resemble the box that contains it. The main symbols are a slightly odd range of icons connected to the game and include pizza, popcorn, a fizzy drink, three pairs of Yahtzee-playing couples and three different boxes containing the game.

As you can see from the pictures to the right, all the special symbols are designed in a very 1970s kind of way; the wild is represented by a starry yellow swirl and the two bonus symbols are a dice roller surround by dice and then five dice zooming into the air.

The wild symbols appear on reel two, three, four and five only and if it contribute to a winning combo you will be taken to another screen where two dice are rolled. The multiplied sum of those dice will be the multiplier which is applied to your win.

The bonus symbol (right) only appears on reel five and every time you land it there it will light up one of the multiplier slots above the reels. You can play the bonus game with only one lit but the longer you wait the higher the multiplier will be. If you collect five the bonus starts automatically.

Now you get to play a game of Yahtzee (as you can see from the video above). You get three chances to roll five dice with the aim of collecting five of one number. Everyone’s a winner here because even if you fail to land a pair you will be rewarded with a ‘Chancey’ multiplier of your original win.

4 To A Yahtzee Free Roll Bonus

This game is a little bit harder to trigger and you will need to land the scatter symbol pictured right five times on adjacent reels.

Here you will find yourself at the same screen as the Yahtzee bonus game but this time four matching dice have already been rolled, guaranteeing you a decent win. Roll the other dice to see if you can get a Yahtzee for an even bigger prize. Now you will get one more roll only to see if you can add to the prize total.

You will notice that there are some big prizes shown on the right hand side of the reels and these are won in the following way:

If you’re going for the big prize then make sure you play with the maximum bet; at €2.00 per spin it’s high but not that bad.

This is a tidy addition to the board game genre with several extra features and it’s always good when you get to play a mini-version of the original game. The Free Roll bonus is a little hard to trigger but stick with it.