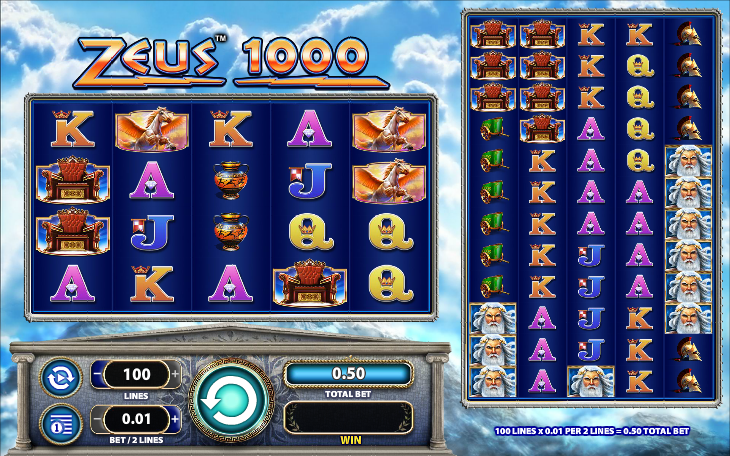 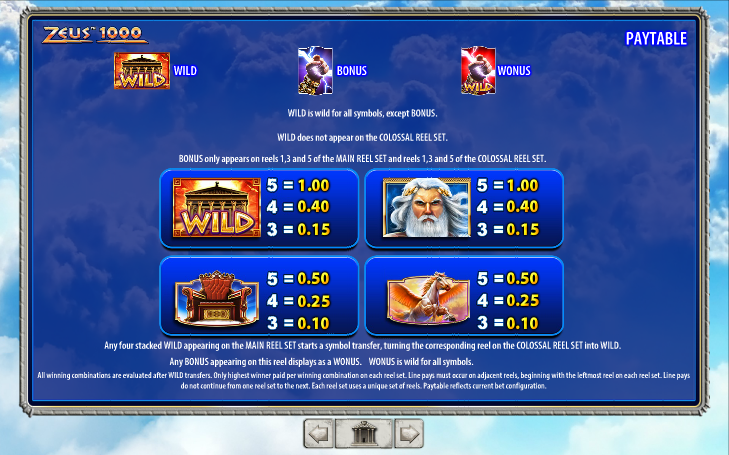 Zeus returns once more to the reels in an online slot from WMS Gaming which adds to their line up of Greek god-themed games such as Zeus and Zeus III. This one’s called Zeus 1000 and and as well stacked wilds and a free spins feature there’s also an interesting reel structure as you can see from the screenshot above. All the essential details are below.

Zeus 1000 has two five reel sets, one with four rows and one with twelve rows and there are one hundred paylines in total – twenty five to the left and seventy five to the right (this is the ‘colossal’ reel set). Our location is presumably Olympus – way above the clouds and mountain tops.

There’s a godly range of high value symbols including Zeus, Pegasus, Zeus’ platinum throne, a chariot, a helmet and a vase; J. Q, K and A make up the lower values.

The wild symbol is a glowing view of Olympus and it only appears on the smaller reel set; however if you can land a full stack there it will transfer to the colossal reel set and fill up the corresponding reel with wilds there.

The bonus symbol is Zeus lightning and appears on reels one, three and five of both reels. On the colossal reel set it becomes a wild symbol also (a ‘wonus’).

This is triggered by landing three or more of the Zeus lightning bonus symbols anywhere on reels one, three and five of both reel sets – a total of six is therefore possible which could earn you the following:

During this feature if you can land four Zeus symbols on the smaller reel set, all Zeus on the colossal reel set pay out up to 1000 extra for that spin. There’s a guaranteed minimum win on this round of 10x your total stake.

We generally like the innovation of the split reels and it’s an engaging way to play what is a high quality slot. It’s a low variance game with an RTP of 96.00% and if we have a gripe it’s that it seems very tough to trigger the free spins but perhaps we were just unlucky.