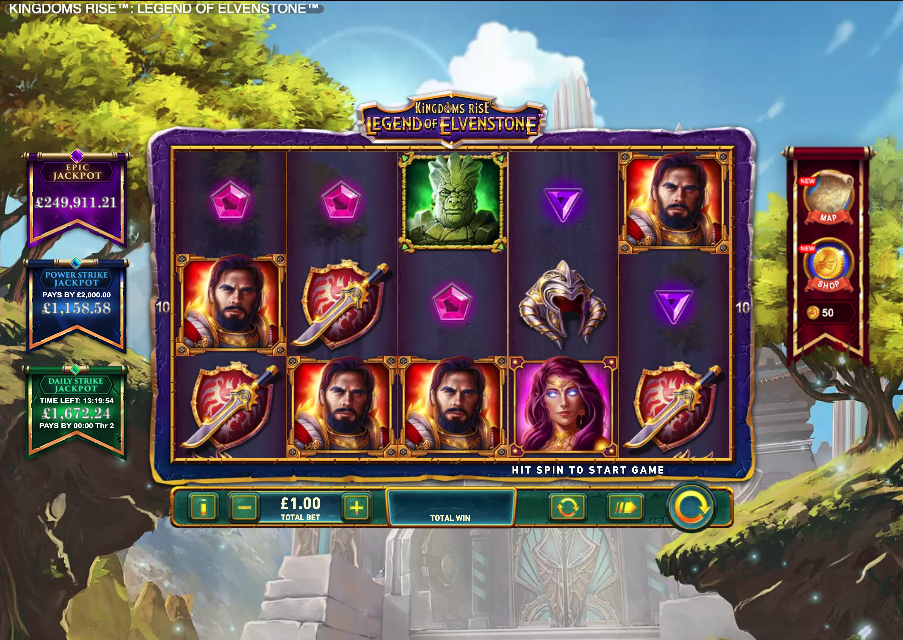 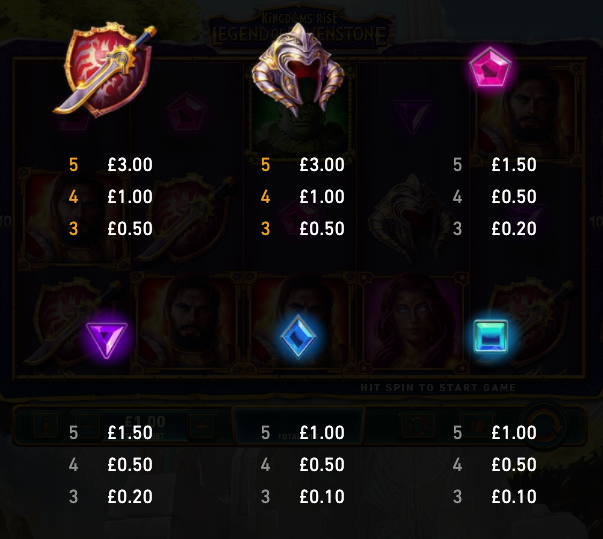 The land of Kingdoms Rise is an ever-expanding one and in this instalment from Playtech/Rarestone Gaming we are introduced to the Legend of Elvenstone; this online slot adds to the colourful storyline and provides us with progressive jackpots, free spins, wild features and the Kingdoms Rise shop in which you can purchase features from the other games in this series.

Kingdoms Rise: Legend of Elvenstone is a five reel slot with three rows and ten fixed paylines; behind those reels an impressive Elven palace rises towards the sky, flanked by ancient trees and lofty mountains. The progressive jackpots are displayed to the left and the links to the world map and shop are on the right.

The higher value symbols include the man (Vavhar Kingsward), woman (Eomen Dragonsward), rock man (Ruk), sword, shield and the helmet while gems in pink, purple and blue make up the lower values; the dragon (Gorog) is the bonus symbol and appears two positions high.

The dark circle is the wild symbol and it will only appear above the reels or overlaid on the bottom two rows; it will then act as a wild and move down one position per spin. If the wild is overlaid on selected symbols the following will occur:

Landing dragon symbols fully in view on reels one and five will trigger this round and it starts with three respins – only dragon eyes and blanks appear during this round and each dragon eye will reset the number of spins to three, locking all the others in place. When you run out of spins or all positions are full of dragon eyes you’ll receive the total of the values shown on each eye.

Legend of Elvenstone is a classy and entertaining addition to the Kingdoms rise narrative and for us the Wild Drops are the standout feature because of the way they keep the action ticking along in the base game. It’s all good though, from the progressive jackpots to the bonus shop and free spins!