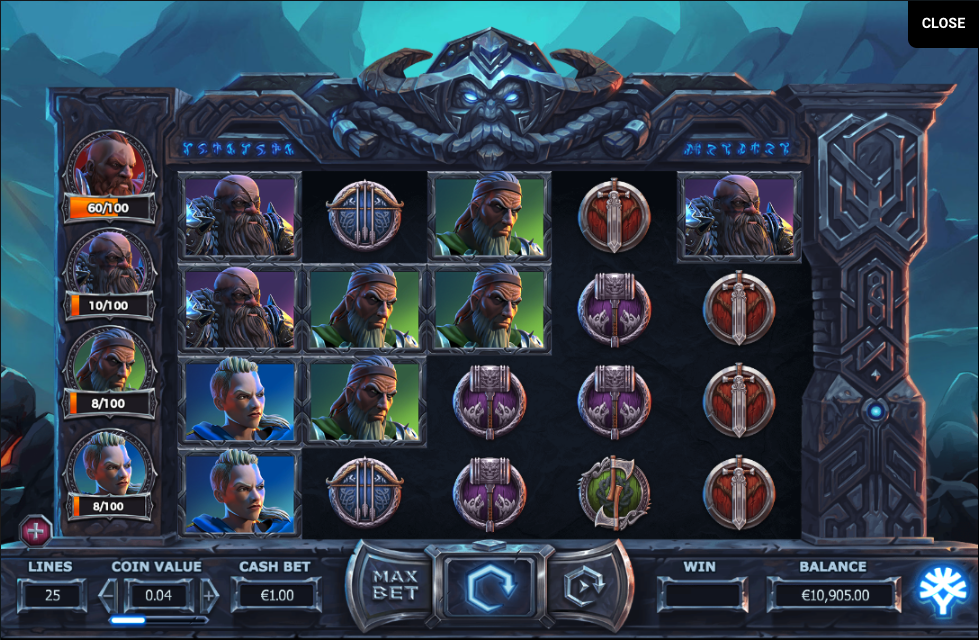 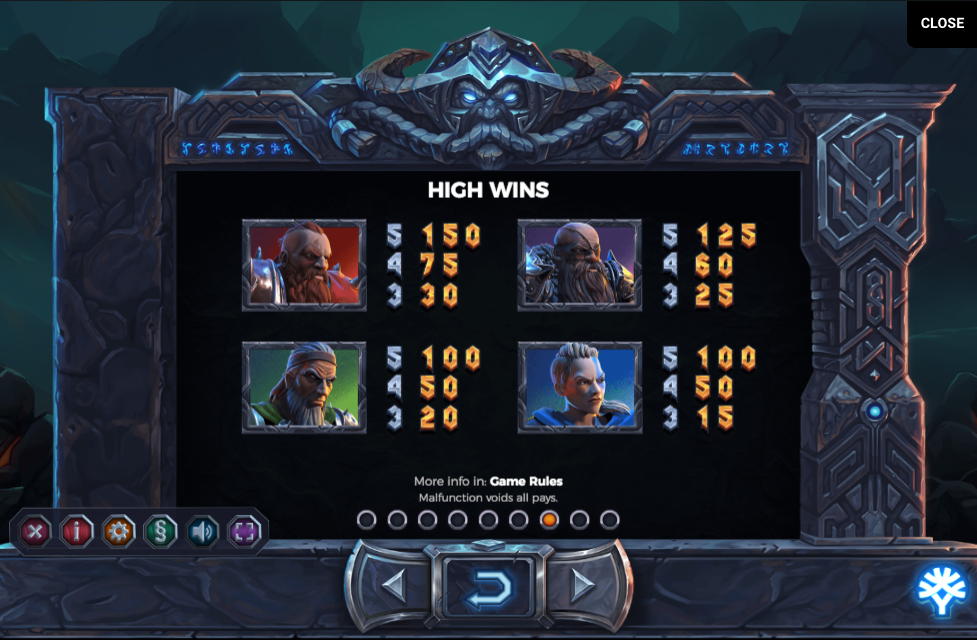 It appears as though karma may have caught up with out favourite rampaging Scandinavians at last – we’ve previously seen them in Vikings Go Wild and Vikings Go Berzerk but now we have Vikings Go To Hell, an online slot from Yggdrasil Gaming which sees our heroes battle the gods of the underworld.

Vikings Go To Hell is a five reel slot with four rows and twenty five fixed paylines; those reels spin on an ornate stone structure covered with runic designs and glowing lights while in the background there’s a glimpse of a desolate landscape. Rage meters of each of the vikings can be seen to the left of the reels.

The four higher value symbols are all scary-looking Vikings who seem as if they wouldn’t be too bothered by a visit to Hell while the lower values are a sword, a hammer, some axes and a bow and arrow.

The wild symbol is a big, gold ‘Wild’ which will substitute for all others to form winning matches except for the ‘Free Spins’ symbols.

The spins are triggered by landing three, four or five of the Free Spin scatter symbols anywhere in view for which you will receive 7, 12 or 16 free spins respectively. All viking symbols on each spin will then fight a demon and if they win that position will become a sticky wild for the rest of the spins; in addition one rage point will be added to that viking’s meter on the left hand side.

After each spin in which a viking appears on the reels there’ll be a battle between one viking and the Lord of Chains; three hits will defeat him after which the viking will turn into a sticky wild and the Lord will become two sticky wilds. You’ll then start Level 2 free spins with seven spins.

In Level 2 you’ll be fighting Lucifer after each spin and again, three hits will defeat him; the viking will become a sticky wild and each successful hit will place another  sticky wild on the reels. If you manage to defeat him, any vikings landing on the remaining spins will instantly become sticky wilds.

The treasure chest appears only on reel five and when it does it will spin to reveal an ‘Epic’ or a ‘Good’ tablet which will then reveal one of the following awards:

On each spin which results in just two Free Spin scatter symbols in view, all vikings on the reels will fight a demon; if this results in a victory then one point is added to that viking’s rage meter and that symbols becomes a sticky wild for one free respin.

When a rage meter is full you’ll trigger Berzerk Free Spins and here you receive seven free spins with the viking always winning any fights.

Wow! Hopefully we’ve explained the gameplay correctly – it’s quite complex but very entertaining once you’ve got to grips with it. Vikings Go To Hell looks fantastic, some of the animations are amazing and it’s certainly a game with plenty of longevity; highly recommended and with an RTP of 96.30%.