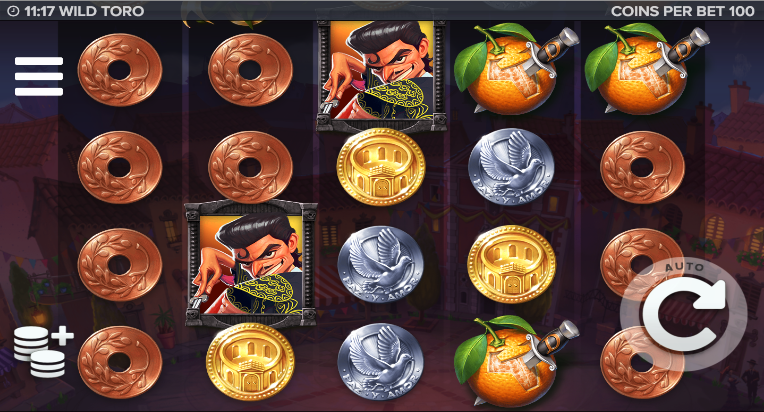 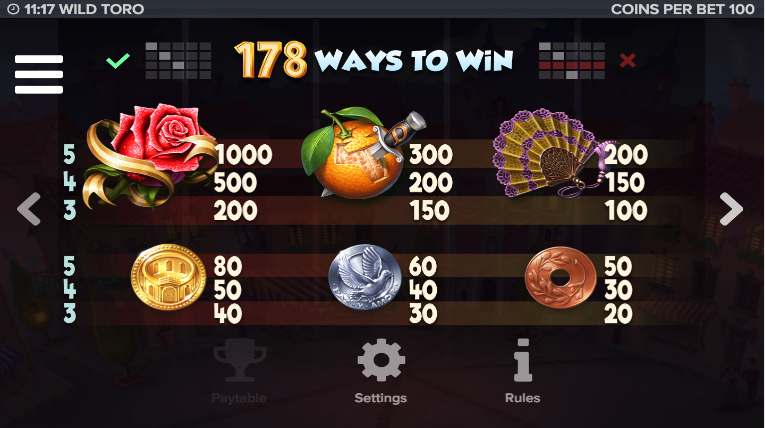 Brand new from Elk Studios is this online slot themed on the ancient and unpleasant ‘sport’ of bullfighting; it stars Diaz Jr., son of Captain Diaz from Elk’s Taco Brothers and it’s called Wild Toro. The good news is that the bull is the hero of this game, rampaging around the reels and getting some revenge on the matador.

Wild Toro is a five reel slot with four rows and 178 ways to win – there’s no standard payline structure, wins are formed as long as there are matching symbols in adjacent reels starting from the left hand side.

There are just six standard symbols on show here and these include a red rose, a stabbed orange, an ornate fan and three coins – gold, silver and bronze.

The wild symbol is the game’s logo and it will substitute for all others to make a winning except the Toro and Matador bonus icons.

The Toro symbol only appears on reel five but when he does he’ll trigger this feature; he will move left one free respin at a time until he drops off the left hand side. He’s also wild symbol so he will hopefully help out with some wins along the way.

Things get exciting when there’s at least one Matador on the reels also because the Toro will then move horizontally and vertically to knock that bullfighter off, leaving a trail of wild symbols in his wake – this is where the big wins are.

This is triggered by landing three of the evil Matador scatter symbols anywhere on reels two, three and four; you will receive three free spins with those Matadors frozen in place and each additional one landing will award one more spin. A Toro appearing or the spins running out will end the feature.

Wild Toro is a top class game full of excellent graphics, great sound effects and two inventive bonus games – it comes with an RTP of 96.40% and is definitely worth checking out.