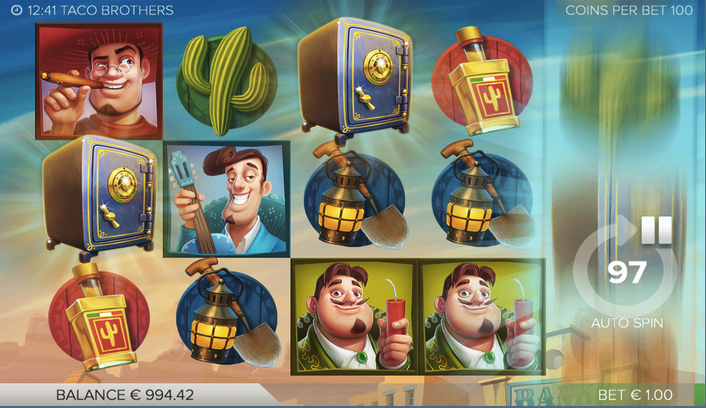 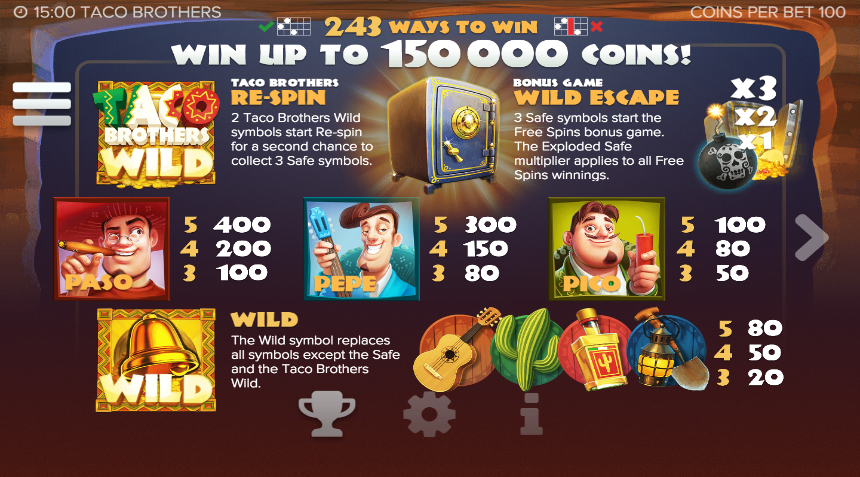 It’s Mexico, it’s 1881 and the evil Captain Diaz has just arrived in the village of Santa Maria to steal everyone’s tacos. Paso, Pepe & Pico are the three brothers trying to correct the situation in this amusing online slot from Elk Studios. It’s called Taco Brothers and it’s a feature-filled game explained in detail in the review below.

Taco Brothers is a five reel slot with three rows and 243 ways to win; it’s designed in a cartoon style and it’s really high quality with the Mexican landscape visible through the transparent reels.

There are seven high value symbols including the three brothers – Paso, Pepe and Pico – along with a guitar, a cactus, a bottle of tequila and some digging equipment.

The wild symbol is a big bell and there’s a second enhanced ‘Taco Brothers’ wild which is explained in more detail below. The safe is the scatter symbol which activates the main feature.

This is triggered by landing three of the safe symbols anywhere in view on reels one, three and five and you now get to play an interesting version of a free spins round.

On each spin one of the brothers will drop onto reel five and act as a wild symbol (called Running Wilds) and on each consecutive spin they will move one position to the left in an attempt to ‘escape’ to the left hand side of the reels.

Two other symbols appear on the reels here and they are:

All wins are paid at a multiplier level (up to x3) set by an exploding safe at the start of the round.

Taco Brothers is great fun to play and it has an all-too-rare understandable narrative to keep you entertained. The free spins round is where all the fun and the big wins are and there’s an RTP of 96.30%. This slot also comes with Elk’s automated betting strategy facility.