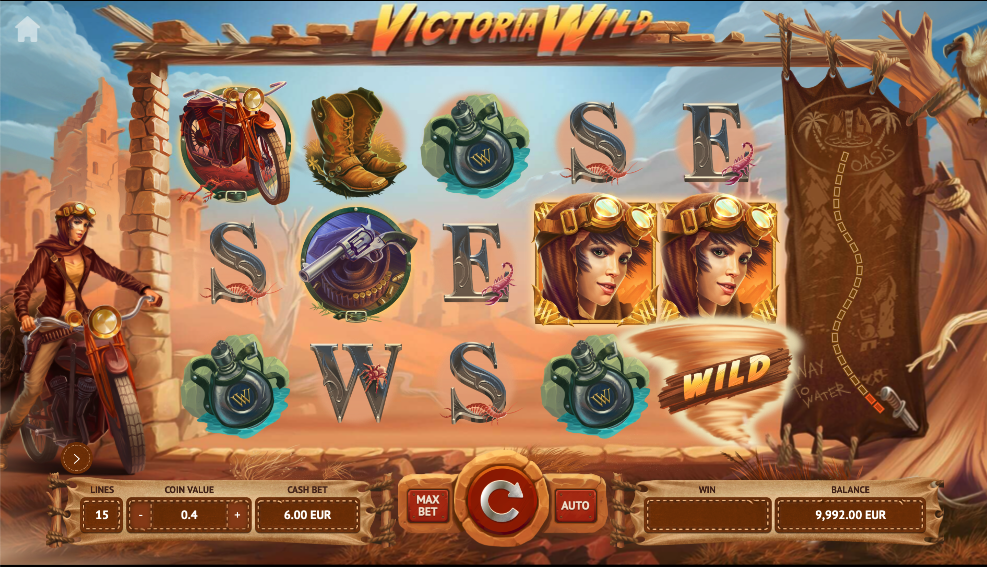 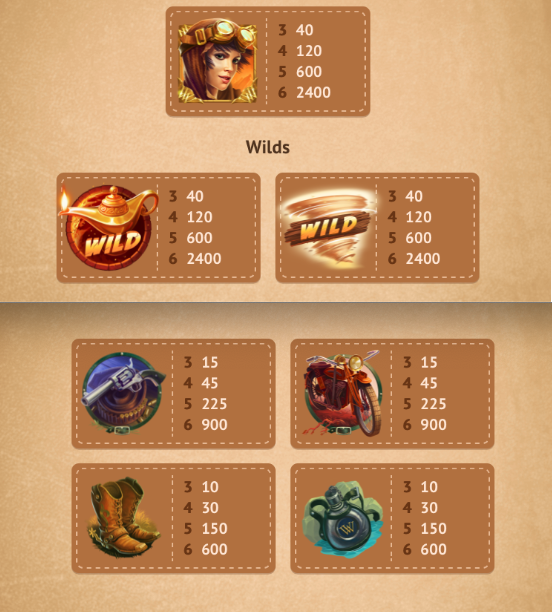 There’s an adventure across the desert waiting for those who’d like to try out this online slot from Yggdrasil Gaming – it’s called Victoria Wild and it include a bae game collection feature, Sandstorm Respins & Temple Free Spins.

Victoria Wild is a five reel slot with three rows and fifteen fixed paylines; a desert environment full of ruined buildings and dead trees creates the scene while Victoria watches on from the left hand side on some sort of vintage motorbike.

Victoria is the highest value symbol and she’s followed by the pistol, the motorbike, the boots and the water flask; ‘S’, ‘N’, ‘E’ and ‘W’ make up the lower values. The tornado is wild and it will replace everything except for the temple scatter symbols to help form winning combinations.

This can occur randomly in the base game and up to six extra wilds will be blown onto the reels; if two land in the same spot you’ll receive a Tornado Respin.

Every oasis symbols which lands on the reels will increment the map meter on the right hand side by one position – when all twenty five positions are full you’ll receive ten Oasis free spins on a set of six reels. Waterfall Wilds may appear on reels two to four during this round and they can expand to fill their whole reels.

Landing three, four or five of the temple scatter symbols anywhere in view will award 8, 10 or 11 free spins respectively on a six reel setup. Collecting lamp wilds during this round will fill up the seven positions below the reels and award the Wheel of Desires – spin this to win a potentially large multiplier of your stake.

Is Victoria Wild the new Rich Wilde? We don’t know yet but this is an enjoyable trip across the desert with plenty of free spins and wild features on offer; it also has a slightly above-average RTP of 96.38% if you like to keep track of that sort of thing.