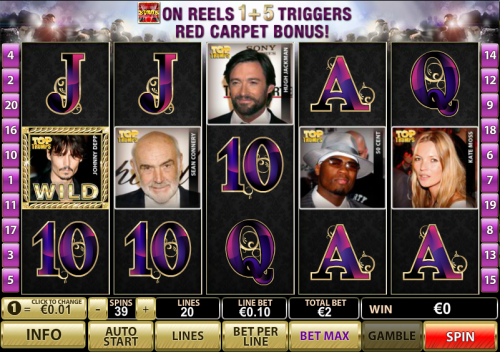 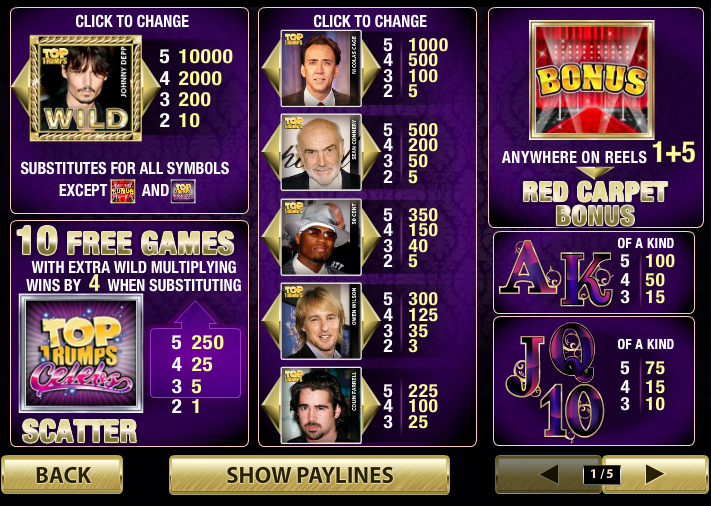 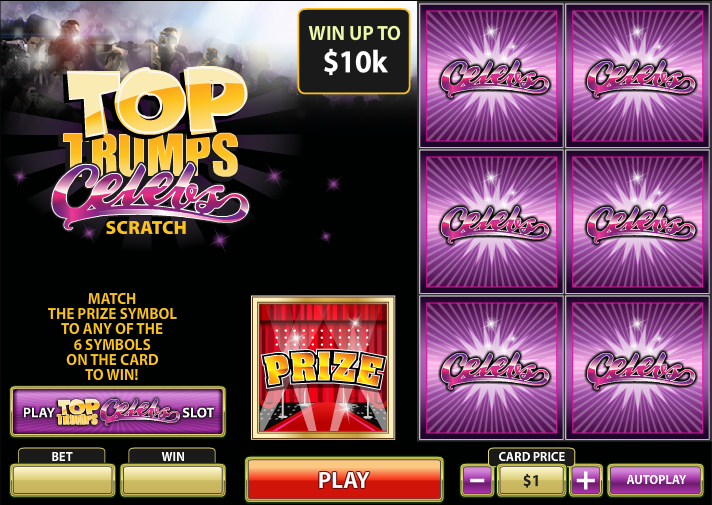 A little while ago we reviewed Top Trumps World Football Stars so if you’ve read that article you’ll know pretty much what Top Trumps Celebs from Playtech is going to offer; that’s not to say it’s not an online slot which is fun to play though because it certainly is – a couple of bonus features, some funky music and some of our ‘favourite’ celebrities make it a worthwhile diversion.

Celebs is a five reel and twenty payline slot which is absolutely honest about fawning at the feet of those famous faces who appear on the reels.  Playing cards are the low value symbols but celebrities fill up almost of of the other spaces.  There are too many to list here but the gang includes Kate Moss, Sean Connery, David Beckham, Owen Wilson and High Jackman.

The wild symbol starts off as a random celeb (see below for how to change this), there’s a red carpet bonus symbol and Top Trumps Celebs scatter which activates the free spins.

There are only five celebrity symbols plus the celebrity wild but for each symbol value you swap the character for a range of others and the same goes for the wild.  You can do this when you load up the game or while playing by clicking the ‘Info’ button underneath the reels.

Landing three, four or five of the Top Trumps Celebs scatter symbols will reward you with 10 free spins; as you can see from the video below, when you start the round you’ll get the opportunity to choose an extra celebrity wild from the three available.

Now just click ‘Start’ to begin the free spins round; if you create a winning combo which includes the extra wild the prize will be subject to a 4x multiplier.  It’s also possible to win more free spins indefinitely by landing more scatter symbols during this bonus game.

Land the Red Carpet bonus symbol on reels one and five on the same spin and you’ll get to play the bonus game; A square continuing sixteen celebrities pops up and you get to pick three – all will contain a cash prize but you might be lucky and pick one which also offers you an extra pick.

Gamblers will appreciate the red/black card prediction game which allows players to double their most recent win up to limit of €2500.  Pick incorrectly and you’ll lose it all though.

Any online slot with so many bonus features is a winner as far as we’re concerned; the groovy soundtrack adds to the fun and even if you don’t like the celebrity culture you should consider playing this slot.