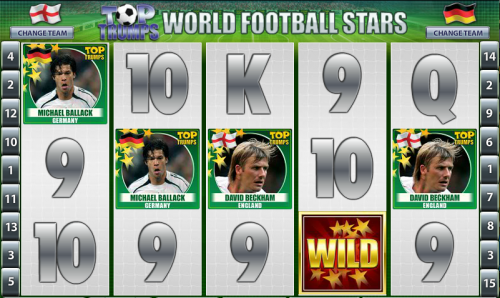 There’s always room in the day for another football-related online slot machine and especially one in which you can pick your national team and pit it against a number of other international sides.  Top Trumps World Football Stars may be a mouthful but it’s also the name of this release from Playtech which is great fun.

It’s a five reel and fifteen payline game with a football pitch as the background; the low value symbols are some fairly boring silver playing cards but the symbols are all famous players from recent times.  You get to pick your team and the team you’re playing when the game starts and as we chose England vs Germany for this test the players featured on the symbols are Steven Gerrard, Wayne Rooney, David Beckham, Michael Ballack, Lothar Matthaus and Jurgen Klinsmann.

Special symbols are a Wild, a Top Trumps scatter, a football and a Free Games symbol featuring the national flags.

The team you pick as your home team will pay on paylines from left to right while the team you are playing against will create winning combinations from right to left.  The also applies to mixed combinations in which players from the same team (not just the same player) make up the winning line.

The free spins round is triggered by landing the national flag of one of the participating teams anywhere on reels one and five; you’ll now get 12 free games but the reels will change so that only your team appears on the reels – this obviously increase your chances of creating winning combinations.  Left to right and right to left paylines are still active.

If you can land the football in the centre of reel two (with a home team player to the left) or reel four (with an away team player to the right) then you can trigger this bonus game.  A ball will bounce across the screen touching every team member on the way – you’ll get  a prize of 3x your total bet for each player it touches.

This is a great, fun to play game which is pretty similar to Playtech’s Ice Hockey; presumably one appeals to Europeans while the other is for North Americans.  Whatever, it’s a worthwhile diversion with lots of bonus features to keep you amused.